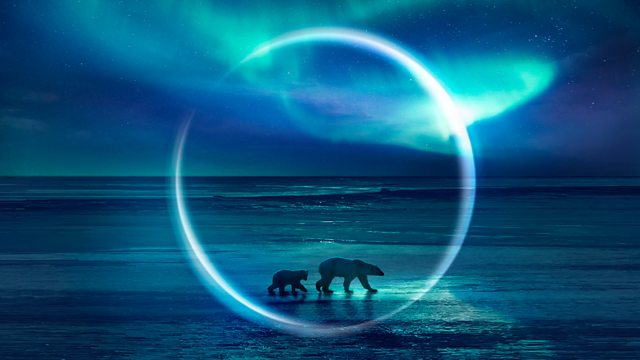 Frozen Peaks: Mountains create frozen habitats on every continent on Earth, and each of these high-altitude worlds holds unique challenges for its surprising and remarkable life. We begin our journey close to the equator – the furthest point from the poles – in East Africa. Here on the high slopes of Mount Kenya, during the day the tropical sun keeps the cold at bay, but at night the frost descends. During this cycle of freeze and thaw, a pregnant high-casqued chameleon must choose the right time to give birth if her newborns are to escape the deadly night freeze.

Away from the equator in the European Alps, long cold winters give way to short, bountiful summers. For a pair of golden eagles raising their chick, the demand to provide enough food for it drives them to tackle prey five times their size. To catch a goat-like chamois, they risk it all using one of the most daring and breathtaking hunting techniques ever witnessed.

The mountains of Japan are the snowiest place on earth, providing hostile conditions for a lone male macaque cast away from his troop. His only chance of survival comes with finding another male whose embrace will provide him with life-saving warmth. But in the frozen peaks, the deadliest force is an avalanche whose full destructive power is captured for the first time using high-speed camera racer drones.

The roof of the world is home to an array of unexpected cold-loving creatures. In the remote Southern Alps of New Zealand, a species of parrot – the kea – uses its famed intelligence to feed on the dead. And in the Andes in South America, flamingos thrive in high-altitude volcanic lakes, but their chicks must race to escape the winter freeze or risk becoming trapped in the ice.

Today, due to climate change, our frozen peaks are undergoing rapid change. Using groundbreaking time-lapse photography, we reveal mountain glaciers vanishing before our very eyes and discover what a warming world may mean for our most famous mountain resident of all, the giant panda.

Frozen Peaks: Mountains create frozen habitats on every continent on Earth, and each of these high-altitude worlds holds unique challenges