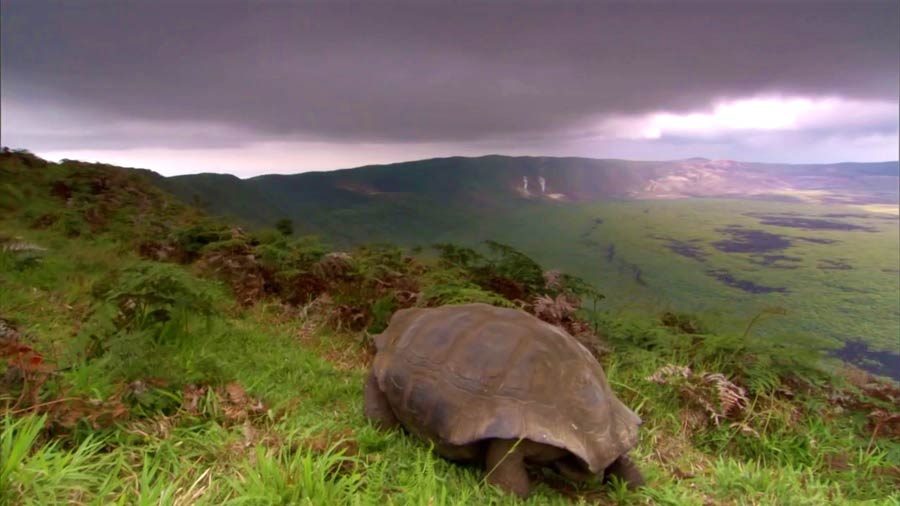 The Galapagos islands are a fascinating microcosm of natural life and home to some of the most astonishing creatures found anywhere on Earth. With spectacular cinematography from land, sea and air, and blending rugged volcanic landscapes with intimate animal behaviour, this ambitious series brings this remarkable archipelago to captivating life.

This opening episode chronicles the many fascinating stages of the island chain’s existence, and reveals how creatures have developed enterprising ways of dealing with life on this restless Pacific outpost.

From flightless cormorants hunting underwater to giant tortoises courting on the rim of an active volcano, a look at the hidden side of Galapagos, revealing why it is such a fascinating showcase for evolution.

Natural history series exploring the Galapagos Islands – a land of fire set astride the equator and exposed to powerful forces of nature. This concluding episode reveals how, through time and isolation, the local animals and plants have evolved the most surprising ways to cope with the profound geological and climatic forces affecting them.

Female land iguanas are forced to climb to the summit of the harshest and most volcanically active of all the Galapagos islands to lay their eggs in the few pockets of warm, soft soil that exist here. Fur seals have learned to seek daytime shelter from the equatorial sun in magical undersea lava grottos. The most bizarre collection of plankton rise from the abyss in the middle of the night on currents welling up from deep beneath the flanks of Galapagos. And comical blue-footed boobies have a flexible breeding season, reacting fast when the ocean currents are at their richest.

Witness the dramatic eruption of the largest of all the volcanoes, Sierra Negra, blowing smoke and ash seven miles into the sky; marine iguanas, the worlds only seagoing lizards, leaping off lava cliffs into treacherous surf; Galapagos giant tortoises, the largest on Earth, being groomed by Darwin’s finches, and the magical courtship display of the waved albatross.

The Galapagos are no ordinary islands. They sit astride the equator, almost a thousand kilometres off the coast of South America, and are connected directly to the heart of the planet. The product of a volcanic hotspot, from the moment they are born, the islands are carried on a remarkable millenia-long journey before sinking back beneath the waves.

The Galapagos islands are a fascinating microcosm of natural life and home to some of the most astonishing creatures found anywhere on Earth.