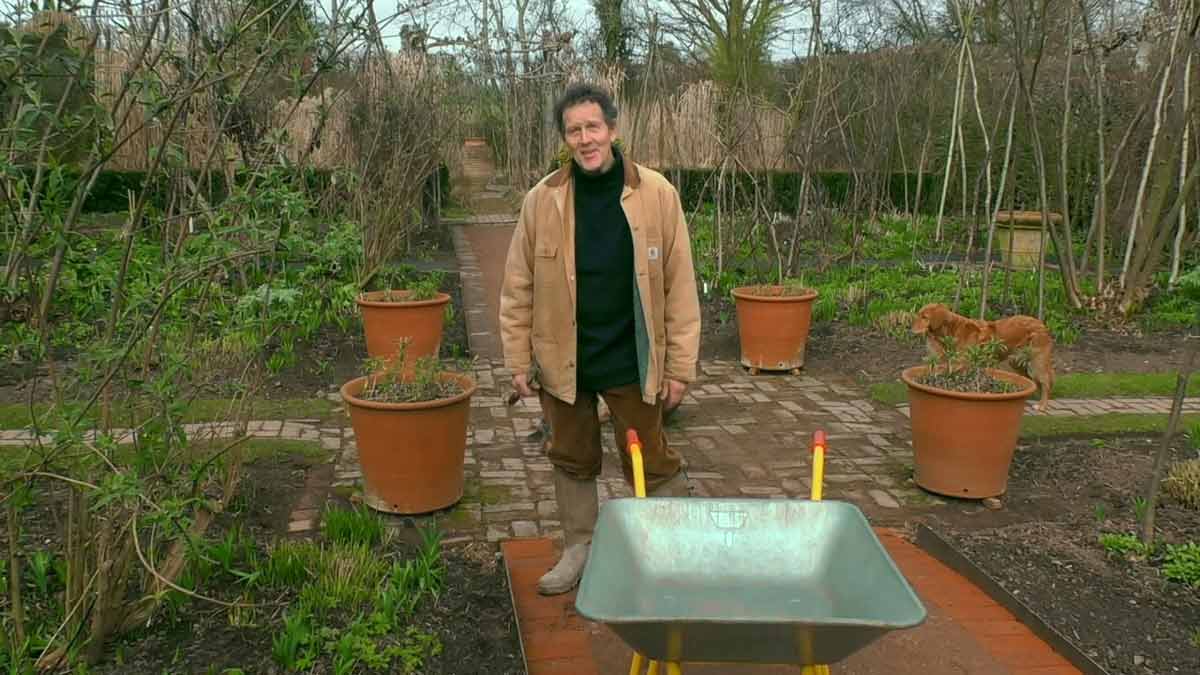 Gardeners’ World 2021 episode 1: Monty Don welcomes spring at Longmeadow with plenty of changes in the garden to share. As well as getting on with some essential pruning, he lifts and divides perennials, starts sowing chillies and begins growing this year’s vegetables.

Last autumn, Joe Swift travelled to Swansea to join Sue Kent and find out about her new plan to grow vegetables on her allotment. There’s a meeting with a passionate gardener at Clumber Park in Nottinghamshire who curates a national collection of over 100 different varieties of rhubarb, and in Leeds there’s a look at how a shady back yard has been transformed using containers and lots of ingenuity.

There’s also another chance to join Carol Klein as she shares the highlights of the plants that shine out in winter at Bressingham Gardens in Norfolk, followed by some of the films that have been sent in by viewers.

How to divide herbaceous perennials

Most perennials benefit from division every two to three years to maintain health and vigour. If you want to increase the number of plants you have by dividing them, the task can be done more regularly.

Plants can be divided successfully at almost any time if they are kept well-watered afterwards. However, division is most successful when the plants are not in active growth.

Plant divisions as soon as possible and water them in well. They can either be replanted in the same spot, taking the opportunity to mix in a little garden compost or other soil improver first, or moved to a new part of the garden. Alternatively, pot up individually to build up size, overwintering pots in a frost-free environment.

Gardens shaded by trees and buildings are increasingly common as gardens get smaller. Although north- or east-facing gardens can be cool and shady for much of the year, they can present some creative opportunities with well-chosen shade-tolerant plants.

Shade is the blocking of sunlight (in particular direct sunshine as opposed to diffuse light reflected from the sky) by any object, and also the shadow created by that object. To grow healthy plants in shady areas, it is important to match the degree of shade that a plant needs or will tolerate with available light. Unfortunately very few plants will thrive where shade is very dense, particularly when coupled with a dry impoverished soil.

Sweet peppers and chillies can be grown in pots on a sunny, warm patio in a similar way to tomatoes, but will produce a better crop when grown in a greenhouse or conservatory. Chillies and peppers are green when young, maturing to a variety of colours and flavour varying from mild to extremely hot.

Peppers and chillies need a warm, sunny sheltered position and, therefore, are only suitable for outdoor cultivation in milder parts of the country, and benefit greatly from cloche or even fleece protection. They can be grown in frames, unheated polythene tunnels or greenhouses and are also suitable for growing in containers or grow bags filled with multipurpose compost.

They require well-drained and fertile, moisture-retentive soil, which is slightly acid. To achieve this, incorporate moderate amounts of well-rotted manure (5.4kg per sq m/10lb per sq yd) into the soil, but avoid using fresh manure or large quantities, as this may lead to lush, leafy growth at the expense of fruit.

How to grow dahlias

Dahlias put on a show in summer and autumn. They come in a wide range of colours from pastels to brights. Very floriferous, they’re also good for cutting. You can buy dahlia plants in summer that are potted up and in full growth. Alternatively, buy dormant tubers in bags in the garden centre in spring or pre-order dormant tubers and rooted cuttings from specialist nurseries for spring delivery.

To grow on tubers and cuttings, you’ll need a frost-free place like a greenhouse with heating or at least insulating fleece, depending on where you live in the country and how cold it is in spring. Bedding dahlias are often seed-raised and will flower that same season. They usually come in a mix of colours or a single colour strain that’s not as uniform as plants-raised from cuttings.

As dahlias are tender, you’re best starting the tubers into growth in the greenhouse, then plant them in their flowering site after the frosty days are passed. For most in the UK, this is at the end of May, but in Scotland this is more typically early to mid June. If you are raising dahlias from seed, sow these in a propagator in early to mid spring.

Roses can be expensive plants, but they last for many, many years and are easy to establish if you follow a few simple steps on planting and aftercare. Roses may struggle to establish, especially if planted poorly, provided with little aftercare, or planted where roses have grown before. They can also suffer from a range of common rose diseases, such as rose blackspot, rose dieback, rose powdery mildew and rose rust. Pests to watch out for include large rose sawfly, rose leaf-rolling sawfly and rose aphids.

Conifers are trees with unique scale-like leaves or needles and their seed-bearing cones are easily recognised. They are mostly evergreen and can grow into large, often very fast-growing trees, although there are many dwarf varieites, including many effective groundcover plants. Many conifers make good hedges too. Yew is a conifer with small cones with a fleshly covering. Gingko is also a conifer, but its triangular leaves are clearly different and like yew its cones (on female plants) also have a fleshy covering.

Choosing good quality conifers, planting them correctly and looking after them for the first few years are crucial to successful conifer establishment. Large conifers are much harder to establish than smaller ones. This applies equally to trees that are being transplanted as to newly purchased specimens.

Potatoes are a versatile vegetable that is eaten all year round. The tubers vary in size, colour, texture and taste and can be grown from spring to autumn. Potatoes require an open, frost-free site with deep, fertile, moisture-retentive and crumbly soil for high quality and heavy yields. Improve soils by adding organic matter, such as well-rotted manure, in the autumn.

Before planting, supplement with a general fertilizer, such as Growmore or blood, fish and bone, applied to the soil surface or spread along the sides of the drill during sowing, at the rate of 1kg per 10m (2.2lb per 33ft) row. Half of this amount will be enough if the garden is known to be fertile.

Gardeners’ World 2021 episode 1: Monty Don welcomes spring at Longmeadow with plenty of changes in the garden to share.