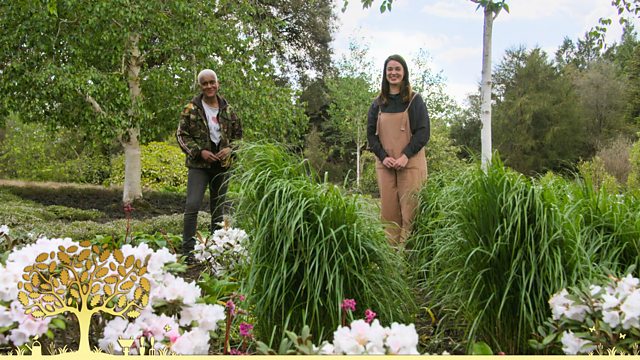 Gardeners’ World 2021 episode 12: Arit Anderson and Frances Tophill introduce a special Gardeners’ World from Wakehurst, Kew’s wild botanic garden in Sussex. They not only explore the gardens but also meet the gardeners, joining in on their planting projects and finding out more about the UK’s largest conservation project, the Millennium Seed Bank.

There’s also a houseplant enthusiast whose passion for monstera has taken over most of the rooms in his flat in Cheltenham, and in London, we visit the garden of a designer who has made the most of the limited space in his outdoor courtyard – but who still finds room for the odd weed or two. And in Cornwall, we discover a gardener with a unique approach to planting meadows by combining edible and ornamental plants.

Wakehurst, previously known as Wakehurst Place, is a house and botanic gardens in West Sussex, England, owned by the National Trust but used and managed by the Royal Botanic Gardens, Kew. It is near Ardingly, West Sussex in the High Weald, and comprises a late 16th-century mansion, a mainly 20th-century garden and, in a modern building, Kew’s Millennium Seed Bank. Visitors are able to see the gardens, the Mansion, and also visit the seed bank. The garden today covers some 2 km2 (490 acres) and includes walled and water gardens, woodland and wetland conservation areas.

RBG Kew has leased the land from the National Trust since 1965 and much has been achieved in this time, from the Millennium Seed Bank project and the creation of the Loder Valley and Francis Rose Nature Reserves to the introduction of the visitor centre, the Seed café and Stables restaurant along with the development of the gardens.

The Millennium Seed Bank Partnership (MSBP or MSB), formerly known as the Millennium Seed Bank Project, is the largest ex situ plant conservation programme in the world coordinated by the Royal Botanic Gardens, Kew. After being awarded a Millennium Commission grant in 1995, the project commenced in 1996, and is now housed in the Wellcome Trust Millennium Building situated in the grounds of Wakehurst Place, West Sussex. Its purpose is to provide an “insurance policy” against the extinction of plants in the wild by storing seeds for future use. The storage facilities consist of large underground frozen vaults preserving the world’s largest wild-plant seedbank or collection of seeds from wild species. The project had been started by Dr Peter Thompson and run by Paul Smith after the departure of Roger Smith. Roger Smith was awarded the OBE in 2000 in the Queen’s New Year Honours for services to the Project.

In collaboration with other biodiversity projects around the world, expeditions are sent to collect seeds from dryland plants. Where possible, collections are kept in the country of origin with duplicates being sent to the Millennium Seed Bank Project for storage. Major partnerships exist on all the continents, enabling the countries involved to meet international objectives such as the Global Strategy for Plant Conservation and the Millennium Development Goals of the United Nations Environment Programme.

The seed bank at Kew has gone through many iterations. The Kew Seed Bank facility, set up by Peter Thompson in 1980, preceded the MSBP and was headed by Roger Smith from 1980 to 2005. From 2005, Paul Smith took over as head of the MSBP. The Millennium Seed Bank building was designed by the firm Stanton Williams and opened by Prince Charles in 2000. The laboratories and offices are in two wings flanking a wide space open to visitors housing an exhibition, and also allowing them to watch the work of cleaning and preparing seeds for storage through the large windows of the work areas.

Monstera deliciosa, the Swiss cheese plant, is a species of flowering plant native to tropical forests of southern Mexico, south to Panama. It has been introduced to many tropical areas, and has become a mildly invasive species in Hawaii, Seychelles, Ascension Island and the Society Islands. It is very widely grown in temperate zones as a houseplant.

The plant may be confused with Thaumatophyllum bipinnatifidum, known as the Split-leaf Philodendron or Tree Philodendron, as they have similar leaves and growing habits. However, the ingestion of Thaumatophyllum bipinnatifidum may cause irritation to the digestive tract and will induce internal swelling. The sap is also known to irritate the skin.