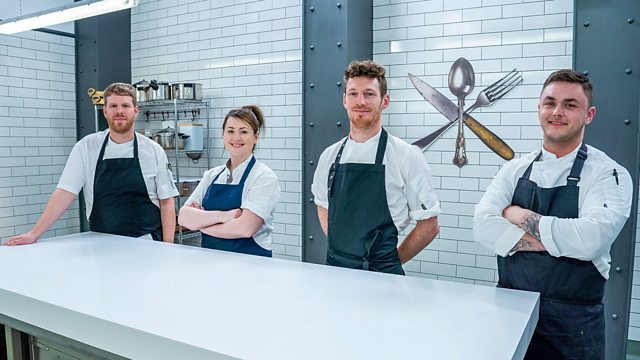 Great British Menu 2021 episode 16 – Northern Ireland Starters: It’s the Northern Ireland heats, and competing for the top spot are four chefs: one returner and three new to the competition. Paul Cunningham has a point to prove, having left the competition after the fish course last year. He’s up against newbies Phelim O’Hagan from Londonderry and Gemma Austin and Andy Scollick from Belfast.

Presenter Andi Oliver welcomes them to the kitchen, where the theme for this year’s competition is a celebration of British invention and innovation. Given Belfast’s renowned connection with the Titanic, there is much luxury maritime inspiration to be drawn, but the chefs also plunder Northern Ireland’s other varied inventions for inspiration.

One of the four must leave the competition at the end of the episode. Which one that is will be decided by the veteran judge of this week’s competition, a previous winner who remains a surprise to the chefs until the moment they walk into the kitchen to taste their first course, canapes.