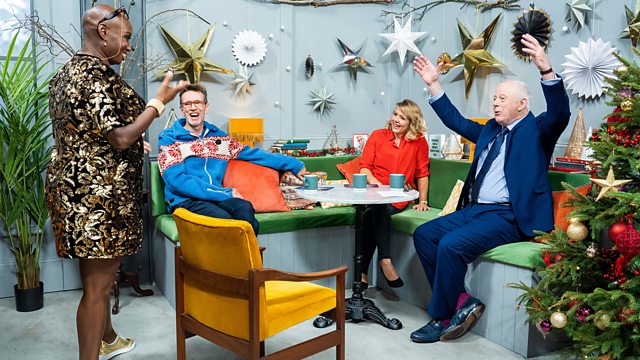 Great British Menu Christmas 2020 episode 3: The competition heats up as eight chefs, all former winners of the Great British Menu, compete to create fish and main courses for an extra special festive feast in honour of some of the heroes of this year’s pandemic. Former judge Andi Oliver hosts.

For this episode, not one but two special guest chefs join the lineup. Multi-Michelin starred chefs Jason Atherton and Tom Aikens, both former winners and judges on Great British Menu, are putting their reputations on the line and competing again against some of the UK’s best young chefs.

The fish and main courses are the heart of any Great British Menu banquet, and with so many amazing chefs taking part, expect opulence, luxury and incredible, mouth-watering food. For the fish course, there’s spectacular salmon and a huge turbot, ‘the King of the Sea’, cooked in a giant antique copper pan known as a turbot kettle. For the main course, there’s venison and a roast that combines 12 different birds!

And the chefs won’t just be cooking; they’ll also be judging each other! Four chefs will cook, then the other four will taste and score their dishes in a blind tasting. Then the roles will be reversed. Expect incredible cooking, tough criticism and surprising scores.

Top British chefs originating from various regions across the UK compete to produce a menu that is served at a prestigious banquet for special events and prominent guests.