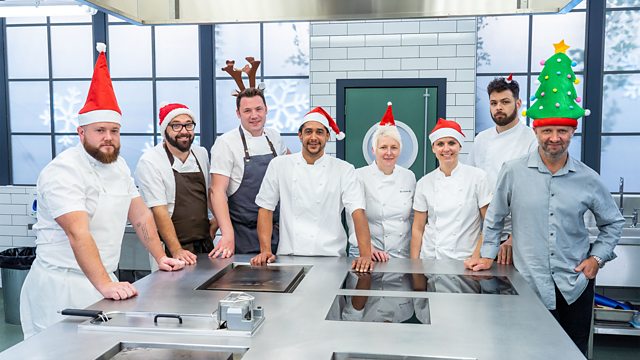 Great British Menu Christmas 2020 episode 5: The Christmas competition comes to a climax with desserts and petit fours. Eight chefs, all former winners of the Great British Menu, are competing to create the final courses of an extra special festive feast for some of the heroes of this year’s pandemic. Only three from each course can go through to tomorrow’s judging. Former judge Andi Oliver hosts.

These are two of the most demanding rounds in the competition, requiring incredible technical skill if the chefs’ dishes are to arrive on the plate perfect, and not a molten mess! Who will keep their cool, as well as that of their dishes?

With so many talented chefs taking part, expect imaginations to run riot. Among the dishes prepared are edible snow globes and a whole new take on the Christmas selection box. There’ll also be some new interpretations of old favourites such as mince pies and baked Alaska.

In a new twist for this Christmas competition, the chefs won’t just be cooking but also judging each other too! Four chefs will cook, and the other four will taste and score their dishes in a blind tasting. Then the roles will be reversed. Expect incredible cooking, tough criticism and surprising scores.

It’s the final chance for chefs to make it to the banquet, and two special guests are joining the competition in hopes of stealng a place. Multi Michelin starred chefs Simon Rogan and Tommy Banks have both been Great British Menu winners and judges, and they haven’t come to make up the numbers!