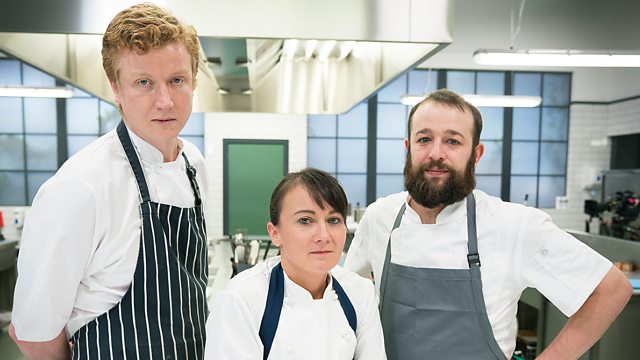 This week in Great British Menu episode 13 2019, three of Scotland’s finest chefs do battle for a chance to cook at the banquet celebrating 50 years of popular music. Gordon Jones, the only newcomer, faces returners Lorna McNee and Ben Reade, who are going head to head for the second time.

Originally from north west Scotland, Gordon is a Michelin-trained chef and owner of Menu Gordon Jones in Bath, offering a surprise tasting menu that changes every day. Lorna McNee is a Scottish Chef of the Year winner and sous chef at Restaurant Andrew Fairlie, the only restaurant in Scotland to hold two Michelin stars. At last year’s GBM, she narrowly missed out on taking her dessert to the banquet. Finally Ben Reade, owner of the Edinburgh Food Studio, a restaurant and food research hub experimenting with the best of Scottish produce. Ben went out during last year’s heat – this time he is determined to make it to Friday’s judging chamber.

The three chefs meet their veteran, before cooking their starters in the new GBM kitchen. Gordon’s dish, Fleetwood Mackerel, is a risky combination of raw mackerel and porridge, inspired by childhood memories spent fishing and listening to Fleetwood Mac in Scotland. Lorna’s starter Elton’s Cheese on Toast also draws on memories growing up, listening to Elton John, and offers a twist on the classic snack. Ben is choosing to pay tribute to the electronic rock band Prodigy’s album Fat of the Land with a pig fat centrepiece, but should he be taking a risk using produce he is not familiar with?

The chefs then move onto the fish course. Lorna is taking a risk by cooking with Indian spices for her dish Spice Up Your Life, to honour the Spice Girls, while Gordon’s It Must Be Love celebrates his love of unusual flavour combinations with langoustine and lamb’s heart. For his fish dish, The Halibut Peel Sessions, Ben is choosing to champion halibut with a tribute to his favourite DJ, John Peel.

This week in Great British Menu episode 13 2019, three of Scotland’s finest chefs do battle for a chance to cook at the banquet celebrating 50 years of popular music.