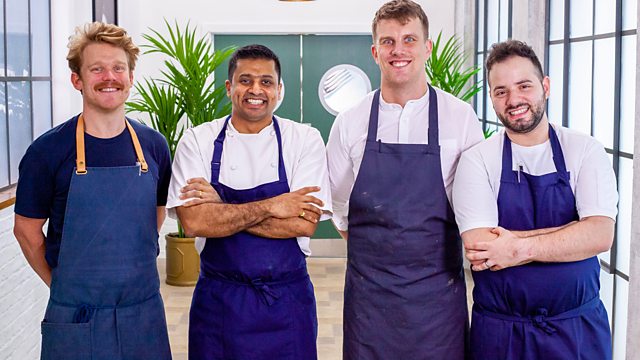 Great British Menu episode 13 2020 – North West – Starter & Fish Courses: The battle is on in the heats for the north west of England. Determined Hrishikesh Desai from The Gilpin in Cumbria is having another crack of the whip after being runner-up in the regional final last year. Hrishikesh won the Roux scholarship in 2009 and Craft Guild of Chefs and National Chef of the Year in 2010. Within 18 months of being executive chef at The Gilpin Hotel and Lake House, he won a Michelin star.

Manchester-born George Farrugia works as head chef of Fenchurch Restaurant at the Sky Garden in London. He started his career working for legendary chef Pierre Koffmann and went on to work with Eric Chavot. Sam Buckley, also hailing from Manchester, has been cooking since he was a teenager. He has worked at the prestigious L’Enclume and now is chef patron of one of Manchester’s most talked about restaurants Where the Light Gets In. Finally, Cumbrian-born Tom Barnes is executive chef across Simon Rogan’s L’Enclume and Rogan & Co. He won the Roux scholarship in 2014 and has been working as a chef since the age of 15, fine-tuning his skills in high-quality, Michelin-starred restaurants.

Susan Calman welcomes the chefs to the competition. Today, one of the four talented chefs is going home, so they have to impress their surprise veteran from the outset. First they must conjure up an amuse bouche. Unaware of who the veteran is, the four chefs rustle up a cold beetroot soup, a tartlet of trout with horseradish, an oyster emulsion with mussel salsa and a potato poppadum and pickles. They bring them to the pass as Michelin-starred Angela Hartnett arrives to give judgement. Although not officially scored, this mini course is ranked and used in the event of a tie.

This week, the chefs are specifically tasked with honouring the theme of action and adventure in literature. Hrishikesh is making a trout dish inspired by Beatrix Potter’s Jeremy Fisher. Tom celebrates Oliver Twist in his take on gruel. Meanwhile, Sam bases all his dishes on adventure book Lord of the Flies, and George is inspired by The Secret Garden.

Great British Menu episode 13 2020 - North West - Starter & Fish Courses: The battle is on in the heats for the north west of England.