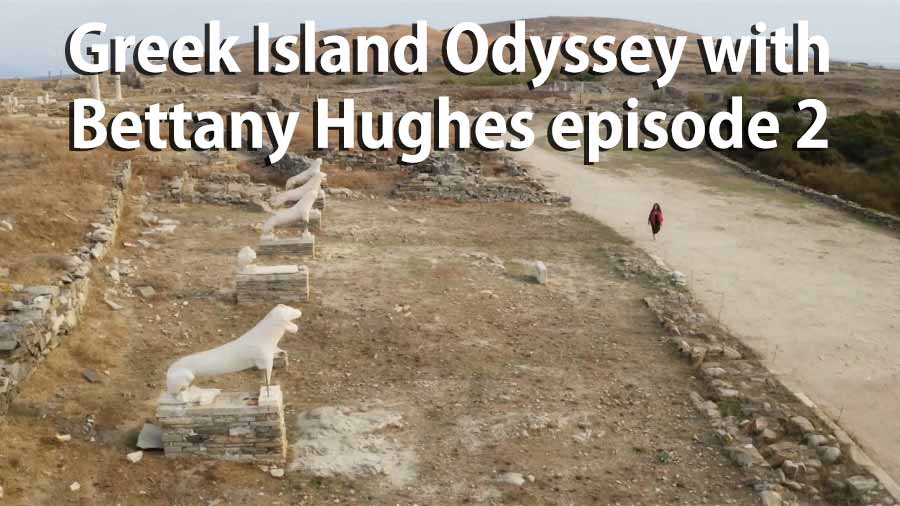 Greek Island Odyssey with Bettany Hughes episode 2: Bettany visits the sacred isle of Delos, where it has been forbidden for anyone to permanently reside since ancient times.

Wandering the ruins, Bettany discovers a dark history to this incredible site as she explores how the Romans turned Delos into a marketplace for their slave trade. She then moves on to Ikaria, an island famous for its long-lived population, and gets a lesson in wine-making. As she moves on to Mykonos, Bettany’s boat is caught in a storm reaching a 10 on the Beaufort scale.

The historian and classicist explore Greece from the time of the Ancients up to the present day.

The island of Delos, near Mykonos, near the centre of the Cyclades archipelago, is one of the most important mythological, historical, and archaeological sites in Greece. The excavations in the island are among the most extensive in the Mediterranean; ongoing work takes place under the direction of the French School at Athens, and many of the artifacts found are on display at the Archaeological Museum of Delos and the National Archaeological Museum of Athens.

Delos had a position as a holy sanctuary for a millennium before Olympian Greek mythology made it the birthplace of Apollo and Artemis. From its Sacred Harbour, the horizon shows the three conical mounds that have identified landscapes sacred to a goddess in other sites: one, retaining its Pre-Greek name Mount Kynthos, is crowned with a sanctuary of Zeus.

Icaria has been inhabited since at least 7000 BC, when it was populated by the Neolithic pre-Hellenic people of the Pelasgians. Around 750 BC, Greeks from Miletus colonized Icaria, establishing a settlement in the area of present-day Campos, which later became the ancient capital city of Oenoe. Anciently, the island was called Icaria or Ikaria, as today; and also Icarus or Ikaros.

Icaria, during the 6th century BC, became part of the sea empire of Polycrates, and during the 5th century BC, the Icarian cities of Oenoe and Thermae were members of the Athenian-dominated Delian League. During the 2nd century, the island was colonized by Samos. At this time, the Tauropolion, the temple of Artemis was built at Oenoe. Coins of the city represented Artemis and a bull. There was another, smaller temenos that was sacred to Artemis Tauropolos, at Nas, on the northwest coast of the island.

Nas had been a sacred spot to the pre-Hellenic inhabitants of the Aegean, and Nas was an important island port in antiquity, the last stop before testing the dangerous seas around Icaria. It was an appropriate place for sailors to make sacrifices to Artemis Tauropolos, who was a patron of seafarers; here, the goddess was represented in an archaic wooden xoanon.

Greek Island Odyssey with Bettany Hughes episode 2: Bettany visits the sacred isle of Delos, where it has been forbidden for anyone to permanently reside since ancient times.