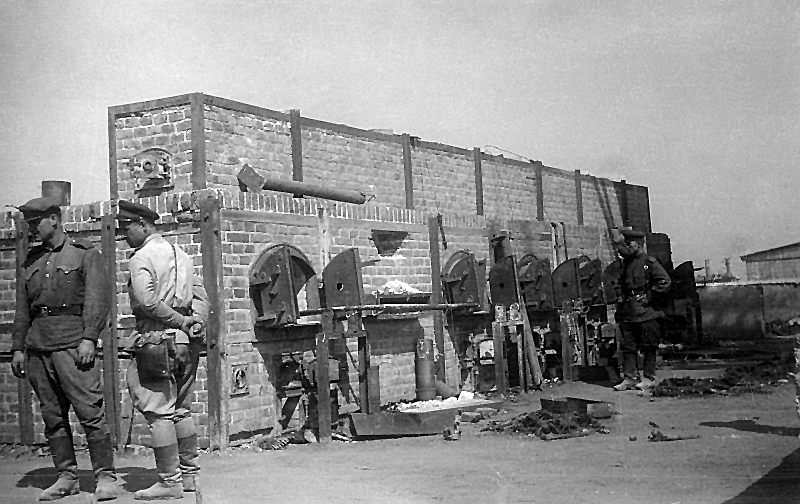 The speed of the Soviet advance gave the Germans no time to destroy or conceal evidence of atrocities committed at the concentration and extermination camp Majdanek. Majdanek was unique in the fact that it was the only camp still operational at the time of its liberation on July 23, 1944.

With footage shot by the Russian forces, which has never been seen before in the west, this stark documentary graphically portrays the terrible tragedy of the two million innocent victims exterminated and the frightful efficiencey of this Nazi death factory.

This documentary is the film record of one of the first Nazi war crimes trials, which was conducted while the war was still raging. Majdanek, a concentration and extermination camp located near Lublin, Poland, was erected in 1941 and liberated in July 1944. When the Soviet and Polish troops drove the Nazis out of the region, they uncovered the evidence of Nazi genocide. One month later, a joint Soviet-Polish commission heard evidence from survivors and witnesses of the atrocities that took place at Majdanek.

Their testimony is preserved in this film. Bengt and Irmgard von zur Muhlen are German film archivists who unearthed a wealth of material in various Eastern bloc archives. Majdanek 1944 includes documentary material made available for the first time in the West.

KL Lublin or Majdanek, was a German concentration and extermination camp built and operated by the SS on the outskirts of the city of Lublin during the German occupation of Poland in World War II. Although initially purposed for forced labor rather than extermination, the camp was used to kill people on an industrial scale during Operation Reinhard, the German plan to murder all Jews within their own General Government territory of Poland.

The camp, which operated from October 1, 1941, until July 22, 1944, was captured nearly intact, because the rapid advance of the Soviet Red Army during Operation Bagration prevented the SS from destroying most of its infrastructure, and the inept Deputy Camp Commandant Anton Thernes failed in his task of removing incriminating evidence of war crimes. Therefore, Majdanek became the first concentration camp discovered by Allied forces. Also known to the SS as Konzentrationslager (KL) Lublin, Majdanek remains the best preserved Nazi concentration camp of the Holocaust.

Unlike other similar camps in Nazi-occupied Poland, Majdanek was not in a remote rural location away from population centres but within the boundaries of a major city (see also: Nisko Plan preceding the formation of the Ghetto). The proximity led the camp to be named Majdanek (“little Majdan”) by local people in 1941 because it was adjacent to the suburb of Majdan Tatarski in Lublin. The Nazi documents initially called the site a Prisoner of War Camp of the Waffen-SS in Lublin because of the way it was operated and funded. It was renamed by Reich Main Security Office in Berlin as Konzentrationslager Lublin on April 9, 1943, but the local Polish name is usually still used.

Majdanek was unique in the fact that it was the only camp still operational at the time of its liberation on July 23, 1944.