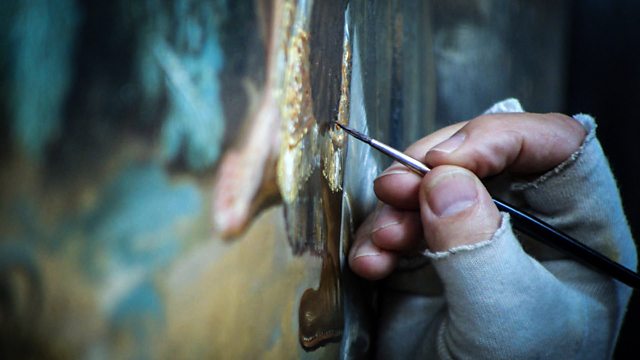 Looking for Rembrandt episode 1 : Rembrandt’s art is much loved and admired, but his remarkable life is less well-known. 350 years after his death, his surprising story told from an unusual perspective – his own.

Rembrandt arrives in Amsterdam ‘like a thunderclap’ and his star rises as he is courted by the city’s wealthy elite. But he has grander plans to be a great history painter. His meticulous attention to emotion means he takes far too long to complete important commissions, bringing him into conflict with Amsterdam’s most powerful patrons.

He falls in love with and marries Saskia van Uylenburgh. Together they enjoy their new-found riches, amassing an incredible personal collection of artwork, exotic curios, stuffed animals and valuable prints, much of which Rembrandt buys at auctions with alarming regularity.

He begins to attract a reputation – one that would dog him throughout his life and even after his death – for being a spendthrift. Yet he continues to create works that declare himself to be among the great old masters like Titian, Raphael and Michelangelo. A hubris which is dramatically paralleled with personal tragedies – the deaths of three of his children in infancy, and Saskia – which nonetheless influence some of his most poignant and moving works.

Rembrandt Harmenszoon van Rijn was a Dutch draughtsman, painter, and printmaker. An innovative and prolific master in three media, he is generally considered one of the greatest visual artists in the history of art and the most important in Dutch art history.

Unlike most Dutch masters of the 17th century, Rembrandt’s works depict a wide range of style and subject matter, from portraits and self-portraits to landscapes, genre scenes, allegorical and historical scenes, and biblical and mythological themes as well as animal studies.

His contributions to art came in a period of great wealth and cultural achievement that historians call the Dutch Golden Age, when Dutch art (especially Dutch painting), although in many ways antithetical to the Baroque style that dominated Europe, was extremely prolific and innovative and gave rise to important new genres. Like many artists of the Dutch Golden Age, such as Jan Vermeer of Delft, Rembrandt was also an avid art collector and dealer.

Looking for Rembrandt episode 1 : Rembrandt's art is much loved and admired, but his remarkable life is less well-known, 350 years after his death.