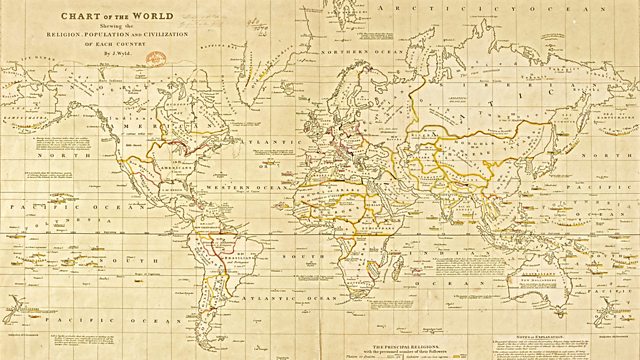 Maps: Power, Plunder and Possession episode 3: In the last of a three-part series about the extraordinary stories behind maps, Professor Jerry Brotton uncovers how maps are snapshots of a moment in history and offer visions of distant lands, tempting explorers to plunder and conquer.

However, adventurers first had to tackle the great challenge of mapping the globe onto a flat surface. There is no perfect solution, but the father of geography, Claudius Ptolemy, had some clever ideas. Explorers like Christopher Columbus sailed into the unknown in search of riches and discovered a whole new continent that would become the most powerful on earth, while Amerigo Vespucci gave it his name.

Sir Walter Raleigh’s treasure map of El Dorado in South America ultimately lost him his head. But the myth of El Dorado lived on, sending hundreds of men to their death in fruitless attempts to find the golden city.

As navigation became easier, maps enabled nations and enterprises like the Dutch East India Company to plunder far-off territories for spices, natural resources and gold. Even today, a project to map the North Pole is the flashpoint for the so-called ‘Cold Rush’ – the dash to exploit oil, gas and mineral reserves as the Arctic ice melts.

Claudius Ptolemy was a mathematician, astronomer, natural philosopher, geographer and astrologer who wrote several scientific treatises, three of which were of importance to later Byzantine, Islamic and Western European science. The first is the astronomical treatise now known as the Almagest, although it was originally entitled the Mathematical Treatise and then known as The Great Treatise.

The second is the Geography, which is a thorough discussion of the geographic knowledge of the Greco-Roman world. The third is the astrological treatise in which he attempted to adapt horoscopic astrology to the Aristotelian natural philosophy of his day. This is sometimes known as the Apotelesmatiká (Ἀποτελεσματικά) but more commonly known as the Tetrábiblos from the Koine Greek meaning “Four Books” or by the Latin Quadripartitum.

Ptolemy lived in the city of Alexandria in the Roman province of Egypt under the rule of the Roman Empire, had a Latin name (which several historians have taken to imply he was also a Roman citizen), cited Greek philosophers, and used Babylonian observations and Babylonian lunar theory. The 14th-century astronomer Theodore Meliteniotes gave his birthplace as the prominent Greek city Ptolemais Hermiou (Πτολεμαΐς ‘Ερμείου) in the Thebaid (Θηβᾱΐς). This attestation is quite late, however, and there is no evidence to support it. He died in Alexandria around 168.

The Dutch East India Company, officially the United Dutch East India Company, was a megacorporation founded by a government-directed consolidation of several rival Dutch trading companies (voorcompagnieën) in the early 17th century. It is believed to be the largest company to ever have existed in recorded history. It was established on March 20, 1602, as a chartered company to trade with Mughal India in the early modern period, from which 50% of textiles and 80% of silks were imported, chiefly from its most developed region known as Bengal Subah. In addition, the company traded with Indianised Southeast Asian countries when the Dutch government granted it a 21-year monopoly on the Dutch spice trade.

The company has been often labelled a trading company (i.e. a company of merchants who buy and sell goods produced by other people) or sometimes a shipping company. However, the VOC was in fact an early-modern corporate model of vertically integrated global supply chain and a proto-conglomerate, diversifying into multiple commercial and industrial activities such as international trade (especially intra-Asian trade), shipbuilding, and both production and trade of East Indian spices, Indonesian coffee, Formosan sugarcane, and South African wine.

Maps: Power, Plunder and Possession episode 3: uncovers how maps are snapshots of a moment in history and offer visions of distant lands.

Civilisations episode 2 – How Do We Look?