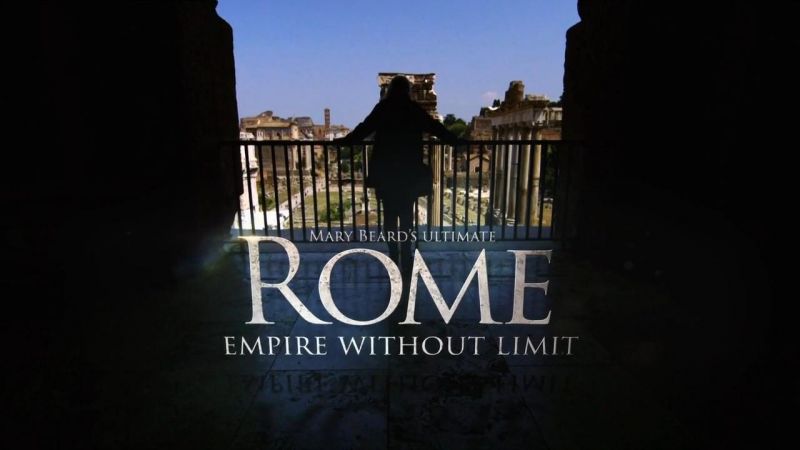 Mary Beard’s Ultimate Rome: Empire Without Limit episode 1: How could a mediocre city in central Italy come to dominate such a huge area? What held the empire together and tore it apart? Mary Beard takes in the history and archaeology of the ancient world.

In this first episode, Mary Beard reaches back to the myths and legends of the origins of Rome to gain an insight into the deep-rooted psyche of the people of Rome – a city born through fratricide and rape. But from the very beginning, Rome was also an asylum for outcasts and exiles and because of this, it adopted a uniquely inclusive approach towards its neighbours and defeated enemies.

The expansion of the city brought territory in first in Italy and Sicily, where Rome first came head to head and eventually defeated her great rival, Carthage. Mary then travels to Greece, where Rome adopted a complex mix of brute force and cultural cringe, and France, where she finds evidence of war methods akin to outright genocide. In typical myth-busting style, Mary argues that the period of greatest Roman expansion occurred when Rome itself was little more than a provincial backwater, a shantytown of mud and brick.

The marble, monumental Rome we know came about because of imperial conquest – not the other way round. And likewise, the creation and possession of an empire transformed the politics of Rome forever, creating the conditions for one-man rule, and ending the centuries-old Roman Republic.

The origin of the city’s name is thought to be that of the reputed founder and first ruler, the legendary Romulus. It is said that Romulus and his twin brother Remus, apparent sons of the god Mars and descendants of the Trojan hero Aeneas, were suckled by a she-wolf after being abandoned, then decided to build a city. The brothers argued, Romulus killed Remus, and then named the city Rome after himself. After founding and naming Rome (as the story goes), he permitted men of all classes to come to Rome as citizens, including slaves and freemen without distinction.

To provide his citizens with wives, Romulus invited the neighboring tribes to a festival in Rome where he abducted many of their young women (known as The Rape of the Sabine Women). After the ensuing war with the Sabines, Romulus shared the kingship with Sabine King Titus Tatius. Romulus selected 100 of the most noble men to form the Roman senate as an advisory council to the king. These men he called patres, and their descendants became the patricians. He created three centuries of equites: Ramnes (meaning Romans), Tities (after the Sabine king), and Luceres (Etruscans). He also divided the general populace into thirty curiae, named after thirty of the Sabine women who had intervened to end the war between Romulus and Tatius.

Mary Beard's Ultimate Rome: Empire Without Limit episode 1: How could a mediocre city in central Italy come to dominate such a huge area?