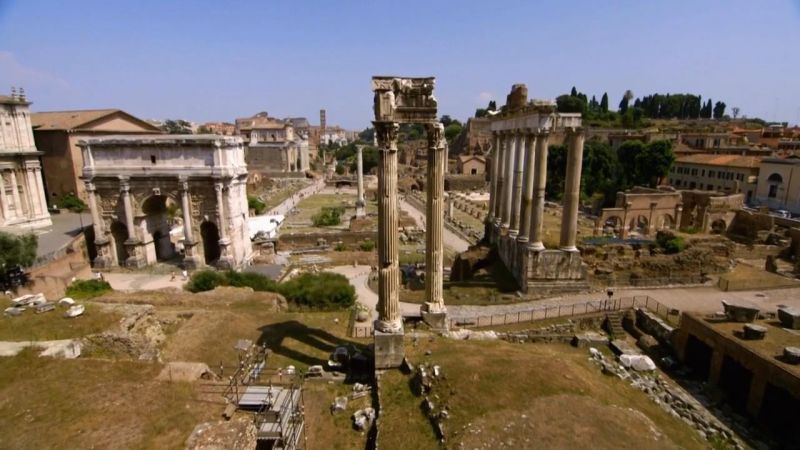 Mary Beard’s Ultimate Rome: Empire Without Limit episode 2: In the second episode, Mary Beard explores the physical world of the Roman Empire, and finds surprising parallels with our own world.

Setting out in the footsteps of the emperor Hadrian, she discovers a vast empire bound together by a common material culture, and a globalised economy of such scale that evidence of its side-effects can still be seen today, thousands of miles away from Rome. Mary unpicks the threads of a huge commercial and cultural network, taking in the vital supply of olive oil to Rome and her armies, the slave trade, and the all-important silver mines of Spain.

Following the famous Roman road network, and the shipping routes connecting the empire’s thriving ports, Mary reveals another side to the Roman Empire, one where builders and traders eclipse soldiers, and starring slaves, not senators, making the most of a hugely connected new world.

Hadrian was Roman emperor from 117 to 138. He was born Publius Aelius Hadrianus in Italica, Hispania Baetica, into a Roman Italo-Hispanic family that settled in Spain from the Italian city of Atri in Picenum. His father was of senatorial rank and was a first cousin of Emperor Trajan. He married Trajan’s grand-niece Vibia Sabina early in his career, before Trajan became emperor and possibly at the behest of Trajan’s wife Pompeia Plotina. Plotina and Trajan’s close friend and adviser Lucius Licinius Sura were well disposed towards Hadrian. When Trajan died, his widow claimed that he had nominated Hadrian as emperor immediately before his death.

Rome’s military and Senate approved Hadrian’s succession, but four leading senators were unlawfully put to death soon after. They had opposed Hadrian or seemed to threaten his succession, and the senate held him responsible for it and never forgave him. He earned further disapproval among the elite by abandoning Trajan’s expansionist policies and territorial gains in Mesopotamia, Assyria, Armenia, and parts of Dacia. Hadrian preferred to invest in the development of stable, defensible borders and the unification of the empire’s disparate peoples. He is known for building Hadrian’s Wall, which marked the northern limit of Britannia.

Civilisation episode 1 – The Skin of Our Teeth