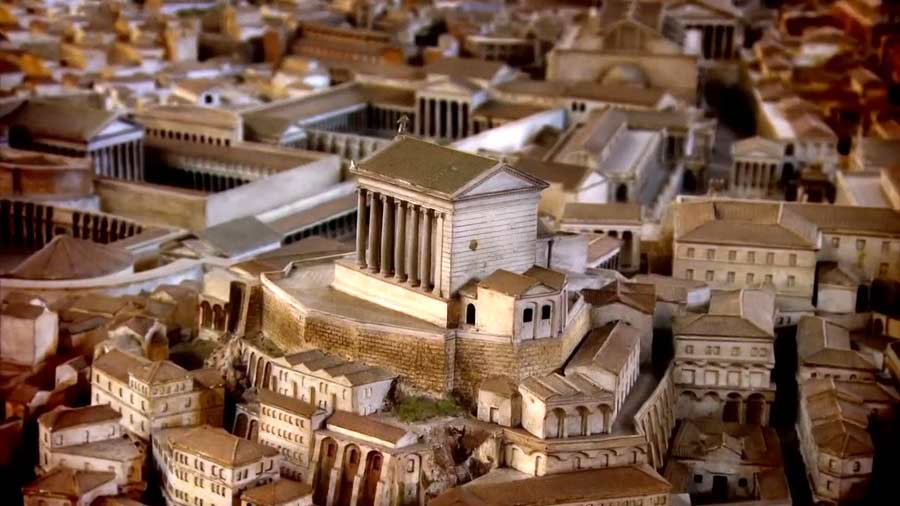 In this programme, Mary descends into the city streets to discover the dirt, crime, sex and slum conditions in the world’s first high-rise city. This Rome is not the marble Rome we know, but a vast, messy metropolis with little urban planning, where most Romans lived in high-rise apartment blocks with little space, light, or even sanitation. Forced outdoors into the city streets, she reveals where they went to hang out, get drunk, have sex and get clean. She looks at the Forum as a place of gamblers, dentists and thieves, and she explores the lustiness of Roman bar life and jokes.

Finally, exploring law and order from the bottom up, Mary examines how this city really worked. She meets Ancarenus Nothus, an apartment dweller who lived in fear of the rent collector; ‘Notorious’ Primus, who wrote about his three great pleasures in life – ‘baths, wine and sex’; and ‘Unlucky’ Doris, a seven-year-old girl killed in one of Rome’s many fires.

We still live in the shadow of ancient Rome – a city at the heart of a vast empire that stretched from Scotland to Afghanistan, dominating the West for over 700 years. Professor Mary Beard puts aside the stories of emperors and armies, guts and gore, to meet the real Romans living at the heart of it all.

In historiography, ancient Rome is Roman civilization from the founding of the Italian city of Rome in the 8th century BC to the collapse of the Western Roman Empire in the 5th century AD, encompassing the Roman Kingdom (753 BC–509 BC), Roman Republic (509 BC–27 BC) and Roman Empire (27 BC–476 AD) until the fall of the western empire.

The civilisation began as an Italic settlement in the Italian Peninsula, traditionally dated to 753 BC, that grew into the city of Rome and which subsequently gave its name to the empire over which it ruled and to the widespread civilisation the empire developed. The Roman Empire expanded to become one of the largest empires in the ancient world, still ruled from the city, with an estimated 50 to 90 million inhabitants (roughly 20% of the world’s population at the time) covering 5.0 million square kilometres at its height in AD 117.

In its many centuries of existence, the Roman state evolved from an elective monarchy to a democratic classical republic and then to an increasingly autocratic semi-elective military dictatorship during the Empire. Through conquest, cultural, and linguistic assimilation, at its height it controlled the North African coast, Egypt, Southern Europe, and most of Western Europe, the Balkans, Crimea and much of the Middle East, including Anatolia, Levant and parts of Mesopotamia and Arabia. It is often grouped into classical antiquity together with ancient Greece, and their similar cultures and societies are known as the Greco-Roman world.