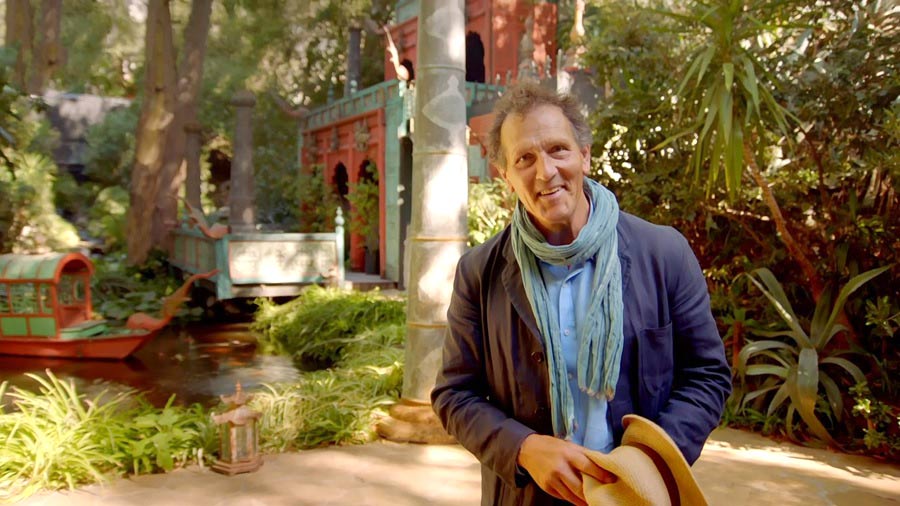 Monty Don’s American Gardens episode 3: In this final programme, Monty explores the extraordinary scenery of the west coast of America.

He begins his journey in Arizona, where he learns about cacti and marvels at the sight of them in the desert and in private gardens, where they have replaced traditional plants and lawns.

From there, Monty travels to Palm Springs, and visits famous gardens made for their owners, from film stars to big businessmen and politicians, all gathering to enjoy the sunshine during the winter months and relax, enjoying their outside spaces and playing golf. Los Angeles is Monty’s next stop, where he slips into a more traditional form of transport to cruise around some fascinating Hollywood homes and also learn about how school children are taking up gardening.

The last stop of this journey is Seattle, where Monty visits a tropical get away for one of the city’s main workforces and some beautiful green spaces just outside the city.

Sunnylands, the former Annenberg Estate, located in Rancho Mirage, California, is a 200-acre (0.81 km2) estate currently run by The Annenberg Foundation Trust at Sunnylands, a not-for-profit organization. The property was owned by Walter and Leonore Annenberg until 2009 and had been used as a winter retreat by the couple from 1966, when the house was completed.

The property is “rich with historical significance,” according to the city of Rancho Mirage, which declared Sunnylands an historic site in 1990. Located at Frank Sinatra and Bob Hope Drives, the property has been the vacation site of numerous celebrities and public officials. Sunnylands is to some extent regarded as the “Camp David of the West.”

Odyssey Charter Schools is an Eco-School currently pursuing five pathways to sustainable development including Sustainable Foods, Energy, Waste and Consumption, Healthy Living, and Schoolyard Habitat. At Odyssey, we are deeply committed to providing our KN-12th grade students with hands-on and real-world opportunities to be environmental stewards of our planet.

Ganna Walska Lotusland, also known as Lotusland, is a non-profit botanical garden located in Montecito, near Santa Barbara, California, United States. The (15 ha / 37 acres) garden is the historic estate of Madame Ganna Walska. The County of Santa Barbara restricts visitation via a conditional use permit: Lotusland botanic garden is open to the public by advance reservation only, with walking tours 1½ to 2 hours long.

Monty Don's American Gardens episode 3: In this final programme, Monty explores the extraordinary scenery of the west coast of America.