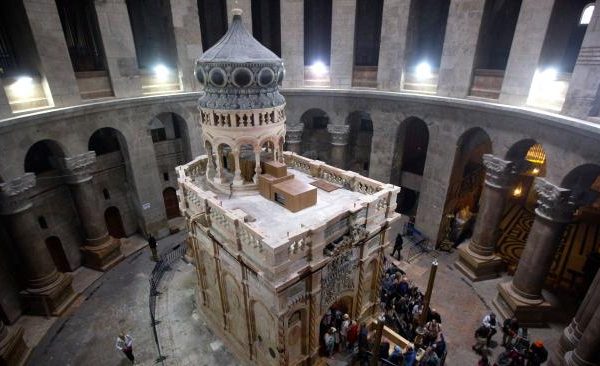 The Secrets of Christ’s Tomb is a new hour-long documentary that reveals some fascinating new information about the Church of the Holy Sepulcher in Jerusalem. The key discovery adds to the level of certainty that the church is built over the stone “bed” where Jesus was buried after his crucifixion nearby.

The story starts in 2016 with the imminent collapse of the Edicule, or “little house,” erected more than two hundred years ago over what is believed to be the burial site within the church. The Edicule has been rebuilt many times (the church itself was destroyed in 1009 and rebuilt) since the time of Constantine. Now in danger of collapsing on pilgrims, the three religious groups that control the Church of the Holy Sepulcher, Armenian Apostolic Christians, Greek Orthodox Christians and Roman Catholics (Franciscans), are forced to agree on repairs to the Edicule, or have the church closed. Something called the “status quo,” an agreement governing how the three groups work together, dictates that all groups must consent before any work is done or any changes made.

The film points out that this is not easily done. A ladder that was placed on an upper level porch of the church, or an attached building, has been there for over 200 years because the groups still cannot agree on taking it down. And this, at the holiest site in Christendom! The grim-looking faces of the religious men who must make the decision creates a curious dissonance between their role and the Christianity they represent. Perhaps that they are trying to preserve this holiest of sites in the contested city of Jerusalem adds to their somber visage.

Professor Antonia Moropoulou, chief scientific supervisor at the National Technical University of Athens, and her interdisciplinary team are engaged to do the work, and they find the condition of the Edicule much more serious than thought. They have been given an almost impossible task: to complete the work in nine months, in time for Easter.

The Secrets of Christ's Tomb is a new hour-long documentary that reveals some fascinating new information about the Church of the Holy Sepulcher in Jerusalem.