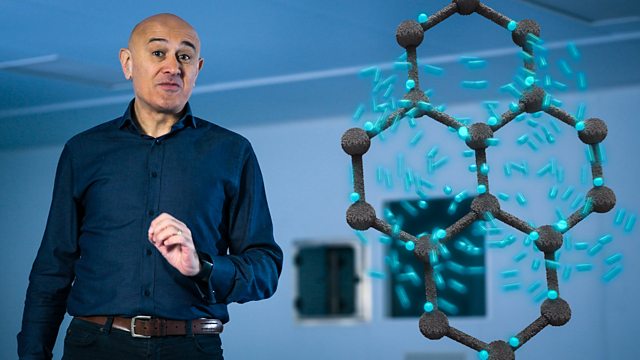 Secrets of Size episode 1 – Atoms to Supergalaxies: What would the universe look like if you were a billion times smaller or a billion times bigger? In this mind-bending series, Jim Al-Khalili will look at the universe across its vast range of size, ranging from the tiniest objects measuring just a few atoms, to vast structures consisting of hundreds of thousands of interconnected galaxies. Investigating these astonishing objects will reveal fundamental truths about our universe. At the end of each film, the audience will see the largest structures ever discovered in the universe and the smallest objects whose images scientists have managed to capture to date.

In the first episode, Jim will enter the Alice in Wonderland world of objects that are too tiny to glimpse with the naked eye. Starting with the smallest insects, he moves on to encounter living cells with amazing superpowers and confronts some of humanity’s deadliest enemies in the form of viruses. Going smaller still, he encounters wondrous new nanomaterials such as graphene, discovered by physicist Andre Geim. These are revolutionising engineering, medicine, computing, electronics and environmental science.

Finally, Jim comes face to face with the fundamental building blocks of the world around us – atoms – and reveals why understanding the science of the ‘small’ is crucial to the future of humanity.

Jameel Sadik “Jim” Al-Khalili CBE FRS FInstP is an Iraqi-British theoretical physicist, author and broadcaster. He is professor of theoretical physics and chair in the public engagement in science at the University of Surrey. He is a regular broadcaster and presenter of science programmes on BBC radio and television, and a frequent commentator about science in other British media.

In 2014, Al-Khalili was named as a RISE (Recognising Inspirational Scientists and Engineers) leader by the UK’s Engineering and Physical Sciences Research Council (EPSRC). He was President of Humanists UK between January 2013 and January 2016.

In 1989, Al-Khalili was awarded a Science and Engineering Research Council (SERC) postdoctoral fellowship at University College London, after which he returned to Surrey in 1991, first as a research assistant, then as a lecturer. In 1994, Al-Khalili was awarded an Engineering and Physical Sciences Research Council (EPSRC) Advanced Research Fellowship for five years, during which time he established himself as a leading expert on mathematical models of exotic atomic nuclei. He has published widely in his field.