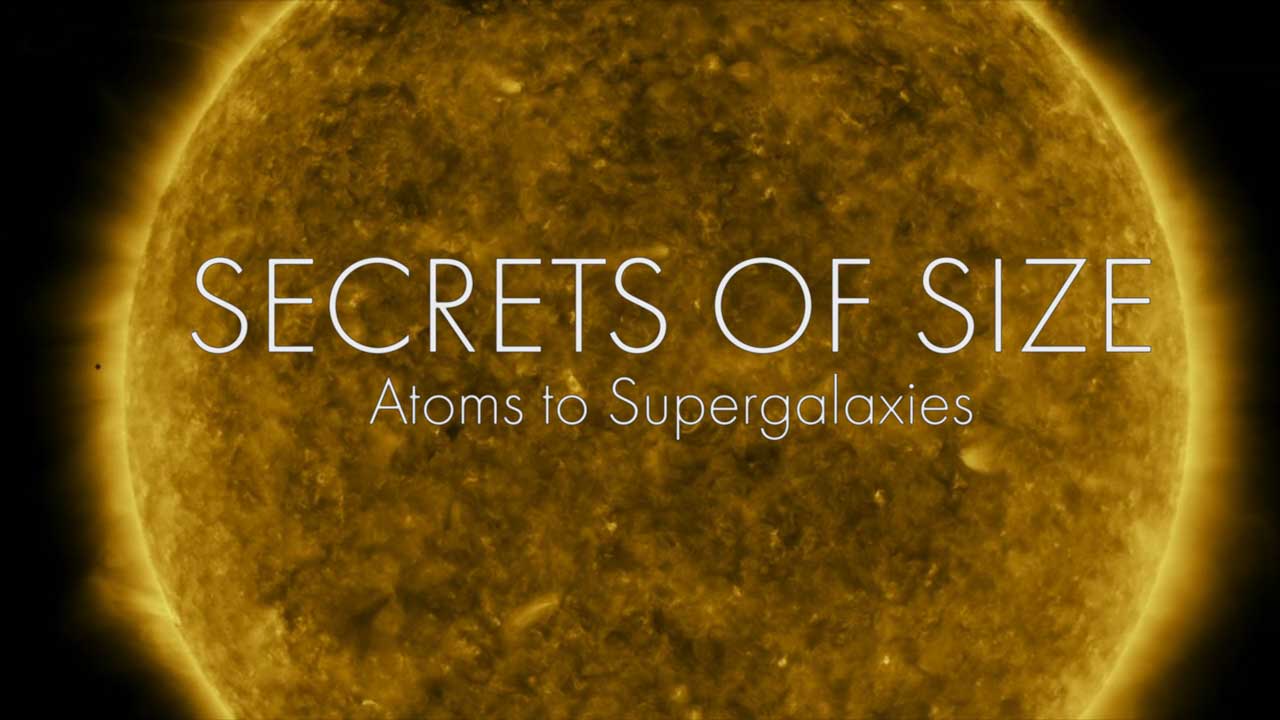 Secrets of Size episode 2 – Atoms to Supergalaxies: In the concluding episode of the series, Jim encounters ever larger cosmic structures to reveal the latest breakthroughs in our understanding of the universe. For example, there’s the heliosphere, a vast cloud of solar plasma that surrounds and protects the solar system. Its unique physics help us understand why life is possible. Larger still, Jim comes face to face with our galactic home the Milky Way, a monstrous structure sculpted by the gravitational forces of dark matter. Jim finds out from pioneering researcher Adrian Fabian about the black hole at its centre, whose strange behaviour includes emitting the lowest note that can be heard in the cosmos.

At an even greater scale, Jim encounters huge structures such as the Laniakea Supercluster, of which the Milky Way is only a tiny part. Then there’s ‘the giant arc’, a collection of galaxies that account for more than three per cent of the observable universe. Jim learns from its discoverer, British PhD student Alexia Lopez, that this gargantuan structure is forcing scientists to reassess their theory of how the universe evolves and may overturn some of the most fundamental principles in physics.

Jameel Sadik “Jim” Al-Khalili CBE FRS FInstP is an Iraqi-British theoretical physicist, author and broadcaster. He is professor of theoretical physics and chair in the public engagement in science at the University of Surrey. He is a regular broadcaster and presenter of science programmes on BBC radio and television, and a frequent commentator about science in other British media.

In 2014, Al-Khalili was named as a RISE (Recognising Inspirational Scientists and Engineers) leader by the UK’s Engineering and Physical Sciences Research Council (EPSRC). He was President of Humanists UK between January 2013 and January 2016.

In 1989, Al-Khalili was awarded a Science and Engineering Research Council (SERC) postdoctoral fellowship at University College London, after which he returned to Surrey in 1991, first as a research assistant, then as a lecturer. In 1994, Al-Khalili was awarded an Engineering and Physical Sciences Research Council (EPSRC) Advanced Research Fellowship for five years, during which time he established himself as a leading expert on mathematical models of exotic atomic nuclei. He has published widely in his field.

Secrets of Size episode 2 - Atoms to Supergalaxies: In the concluding episode of the series, Jim encounters ever larger cosmic structures to reveal the latest breakthroughs in our understanding of the universe.