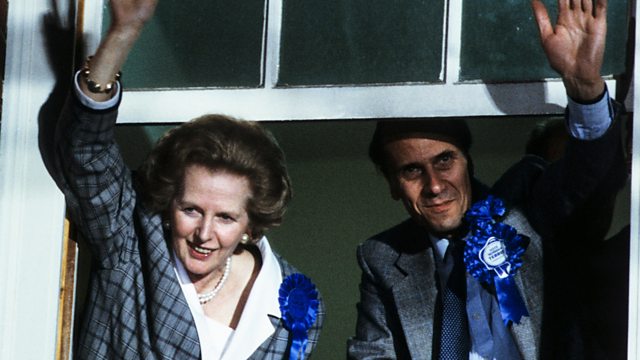 Thatcher – A Very British Revolution episode 4 – That Bloody Woman: As Mrs Thatcher’s government transforms the British economy, tensions erupt within her inner circle and personal relationships in her own family are exposed.

In episode four of the series Mrs Thatcher and her government seek to transform the British economy with far reaching consequences. Tensions surface amongst her closest allies as she seeks to improve her public image and events reveal that the Iron Lady has emotional vulnerabilities in relation to her family.

Mrs Thatcher’s reputation amongst some sections of the public is poor. Her forthright style, such as telling the press not to be “moaning minnies” about unemployment when visiting north east England, has led to her being viewed as domineering and unsympathetic. In an embarrassing TV interview she is told that this issue is referred to within her own party as the TBW factor (“that bloody woman”). When colleagues attempt to discuss this problem she becomes angry at the Conservative central office team who bring her the news.

In an attempt to present a softer image Mrs Thatcher opens the doors of Downing Street to cameras and interviewers. Quizzed by Miriam Stoppard about her family, Mrs Thatcher offers insights into her modest upbringing in Grantham and in a startling moment is moved to tears when discussing her father and his departure from his senior position on the local council. The interview also raises questions about her own role as a mother and how she has balanced this with her political career. Her vulnerabilities around family are further exposed when the press ask questions about whether business deals her son is involved in create conflicts of interest.

Meanwhile, her government embarks on a radical transformation of the British economy. Mrs Thatcher is determined that Britain will embrace the free market and entrepreneurship. A programme of privatisation is underway that takes major nationalised industries into the private sector and offers millions of people the opportunity to own shares. It is a hallmark policy that will define the Thatcher years. Additionally, Mrs Thatcher greenlights a transformation of the operations of the City of London. Trading restrictions are lifted and regulation relaxed in the “Big Bang” that will bring a flood of new money into the City and a new generation of young, ambitious financiers. Many find the explosion of wealth and extravagance distasteful and damaging.

As the 1987 election approaches there are serious tensions inside the Conservative Party. Disagreements about strategy and personal differences between some of Mrs Thatcher’s closest advisors have been building. Mrs Thatcher is becoming suspicious of her party colleagues and closer to her inner circle of civil servants and specially appointed advisors. These tensions break out during the 1987 election campaign when polls seem to suggest that Labour are closing on the Conservatives and threatening to deny Mrs Thatcher a third victory. After explosive rows Mrs Thatcher asserts her authority and leads the campaign. When the results come in she has won another landslide victory but relationships with some of her closest allies are damaged forever.

Her political philosophy and economic policies emphasised deregulation (particularly of the financial sector), flexible labour markets, the privatisation of state-owned companies, and reducing the power and influence of trade unions. Her popularity in her first years in office waned amid recession and rising unemployment, until victory in the 1982 Falklands War and the recovering economy brought a resurgence of support, resulting in her landslide re-election in 1983.