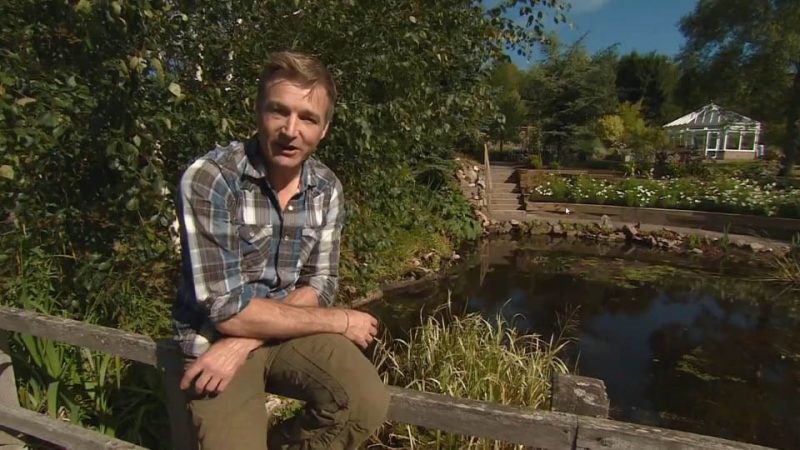 Jim, Carole and George begin a series of bulb plantings by naturalising some unusual bulbs in the new lawn. Chris, with advice from Jim and Carole, takes on an emotional job as the decision is made to cut down and replace the 15-year-old cryptomeria tree in Beechgrove Garden episode 20 2016.

Jim visits a special garden that he has been hoping to see for years, Portmore near Eddleston.

In the spring a new Asparagus crop was planted in one of the polytunnels – the variety was ‘Mondeo’.  As these are new plants they were not cropped this year. They have been left to grow and will be treated like herbaceous perennials. Once the fronds start to go yellow they will be cut back to the ground and next year can
be harvested for 8 weeks.

The hard decision has been made to remove this sickly looking tree (Cryptomeria japonica ‘Elegans’.) beside the pond even though it has been a stay of execution several times as it looked as if it might survive, However it is not, and is showing even more signs of dying off. The easiest way of taking down a tree of this kind of size is to remove the side branches first before tackling the trunk.

Then choose the best orientation for what is left of the tree to come down into and then take a V shaped notch out of the trunk there at about waist level (cut first a horizontal cut then a cut at 45 angle to that) take out the resulting notch and hopefully the tree will come down in that direction. Before the tree stump was removed, Chris investigated the reasons why it was looking so sick.

The bulb season is upon us already, and Carole was remembering that in 2013 she naturalised 5 different collections of Narcissi in the lawn nearby and she wanted to extend our area of naturalised bulbs here. This time Carole was planting 2 varieties of crocus, Scilla siberica, and Erythronium and Fritillaria meleagris.

They come up every year and may even set seed and increase their expanse year after year. The clumps Erythronium and Fritillaria meleagris prefer shade and should be planted in the shade of the hedges there. Carole’s weapon of choice for planting was a trowel rather than a bulb planter as these bulbs are fairly small.

In Beechgrove Garden episode 20 2016: Jim, Carole and George begin a series of bulb plantings by naturalising some unusual bulbs in the new lawn.