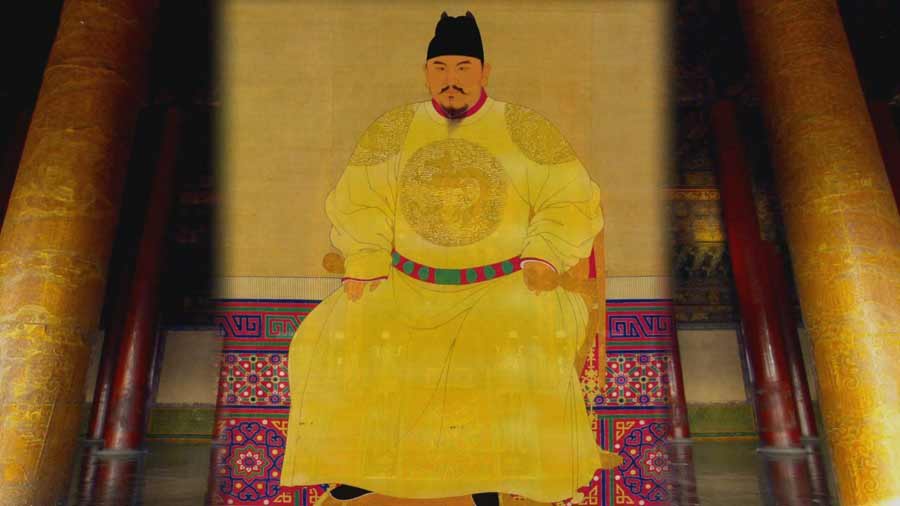 The Story of China episode 4 - The Ming

The Story of China episode 4 – The Ming: The tale of the Ming dynasty begins with the amazing story of Hongwu, a peasant rebel. Michael Wood explores the history of the world’s newest superpower.

The tale of one of China’s most famous dynasties begins with the amazing story of Hongwu, a peasant rebel who founded one of greatest eras in Chinese history.

The Story of China episode 4 – The Ming

The film takes us to his great capital Nanjing, with its 21 miles of walls, each brick stamped with the name of the village that made it. Following the trail, we go to the Bao family village and see the villagers act a Ming murder story. Like many authoritarian states, the Ming were obsessive about architecture.

We see the giant fortifications of the Great Wall, the ritual enclaves of the Forbidden City in Beijing and travel with bargeman Mr Hu down the Grand Canal, China’s great artery of commerce right up to the present day. We then hear about Admiral Zheng He’s voyages to Africa and the Gulf decades before Columbus, watch the construction of an ocean-going wooden boat 250ft long, and hitch a ride on a replica Ming junk in the South China Sea.

As state prosperity grew, so did a rising middle class. Wood looks at Ming culture in Suzhou, the ‘Venice of China’. Staying in a merchant’s house, he discovers the silk, ceramic and lacquer-making industries, and visits one of the most beautiful gardens in the city. Then on to Macao and the arrival of Jesuit missionary Matteo Ricci, who hoped to convert China to Christianity.

In the cathedral in Beijing, we learn more about these fateful exchanges with the west. Finally in Shaoxing, we visit the house of the ‘Ming Proust’ and at grassroots the Zhao family in Fujian where the film ends in an elegiac mood with the fall of the Ming in 1644.

The Ming dynasty officially the Great Ming, was the ruling dynasty of China from 1368 to 1644 following the collapse of the Mongol-led Yuan dynasty. The Ming dynasty was the last imperial dynasty of China ruled by Han Chinese. Although the primary capital of Beijing fell in 1644 to a rebellion led by Li Zicheng (who established the Shun dynasty, soon replaced by the Manchu-led Qing dynasty), numerous rump regimes loyal to the Ming throne – collectively called the Southern Ming – survived until 1662.

The Hongwu Emperor (r. 1368–1398) attempted to create a society of self-sufficient rural communities ordered in a rigid, immobile system that would guarantee and support a permanent class of soldiers for his dynasty: the empire’s standing army exceeded one million troops and the navy’s dockyards in Nanjing were the largest in the world. He also took great care breaking the power of the court eunuchs[9] and unrelated magnates, enfeoffing his many sons throughout China and attempting to guide these princes through the Huang-Ming Zuxun, a set of published dynastic instructions.

This failed when his teenage successor, the Jianwen Emperor, attempted to curtail his uncles’ power, prompting the Jingnan Campaign, an uprising that placed the Prince of Yan upon the throne as the Yongle Emperor in 1402. The Yongle Emperor established Yan as a secondary capital and renamed it Beijing, constructed the Forbidden City, and restored the Grand Canal and the primacy of the imperial examinations in official appointments. He rewarded his eunuch supporters and employed them as a counterweight against the Confucian scholar-bureaucrats. One, Zheng He, led seven enormous voyages of exploration into the Indian Ocean as far as Arabia and the eastern coasts of Africa.

In the middle of the 14th century, with famine, plagues, and peasant revolts sweeping across China, Zhu Yuanzhang rose to command the force that conquered China and ended the Mongol-led Yuan dynasty, forcing the Mongols to retreat to the Eurasian Steppe. Zhu claimed the Mandate of Heaven and established the Ming dynasty at the beginning of 1368; later in the same year his army occupied the Yuan capital, Khanbaliq (present-day Beijing). Trusting only in his family, he made his many sons powerful feudal princes along the northern marches and the Yangtze valley.[4] Having outlived his eldest son Zhu Biao, Hongwu enthroned Zhu Biao’s son via a series of instructions; this ended in failure, when the Jianwen Emperor’s attempt to unseat his uncles led to the Jingnan Rebellion.

Title
The Story of China episode 4 - The Ming
Description

The Story of China episode 4 - The Ming: The tale of the Ming dynasty begins with the amazing story of Hongwu, a peasant rebel.