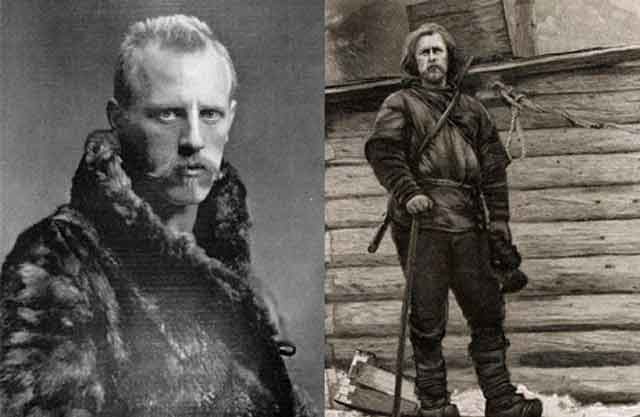 Voyages of Discovery episode 3 – Ice King: Explorer Paul Rose tells the story of his hero Fridjtof Nansen who, in 1892, announced a daring plan to be first to the North Pole, an idea considered so off-the-wall that no scientist would volunteer to join him on a venture they believed was nothing short of suicide.

He allowed his ship to become stuck in the crushing pack ice, hoping it would drift to the Pole, and then set off on foot across the frozen wastes. Nansen became the forefather of polar exploration, inventing practical techniques that today allow people to survive, travel and work in the most hostile and forbidding places on our planet.

Fridtjof Wedel-Jarlsberg Nansen was a Norwegian explorer, scientist, diplomat, humanitarian and Nobel Peace Prize laureate. In his youth he was a champion skier and ice skater. He led the team that made the first crossing of the Greenland interior in 1888, traversing the island on cross-country skis. He won international fame after reaching a record northern latitude of 86°14′ during his Fram expedition of 1893–1896. Although he retired from exploration after his return to Norway, his techniques of polar travel and his innovations in equipment and clothing influenced a generation of subsequent Arctic and Antarctic expeditions.

Nansen studied zoology at the Royal Frederick University in Christiania and later worked as a curator at the University Museum of Bergen where his research on the central nervous system of lower marine creatures earned him a doctorate and helped establish neuron doctrine. Later, neuroscientist Santiago Ramón y Cajal won the 1906 Nobel Prize in Medicine for his research on the same subject. After 1896 his main scientific interest switched to oceanography; in the course of his research he made many scientific cruises, mainly in the North Atlantic, and contributed to the development of modern oceanographic equipment.

Voyages of Discovery episode 3: Paul Rose tells the story of his hero Fridjtof Nansen who, in 1892, announced a daring plan to be first to the North Pole