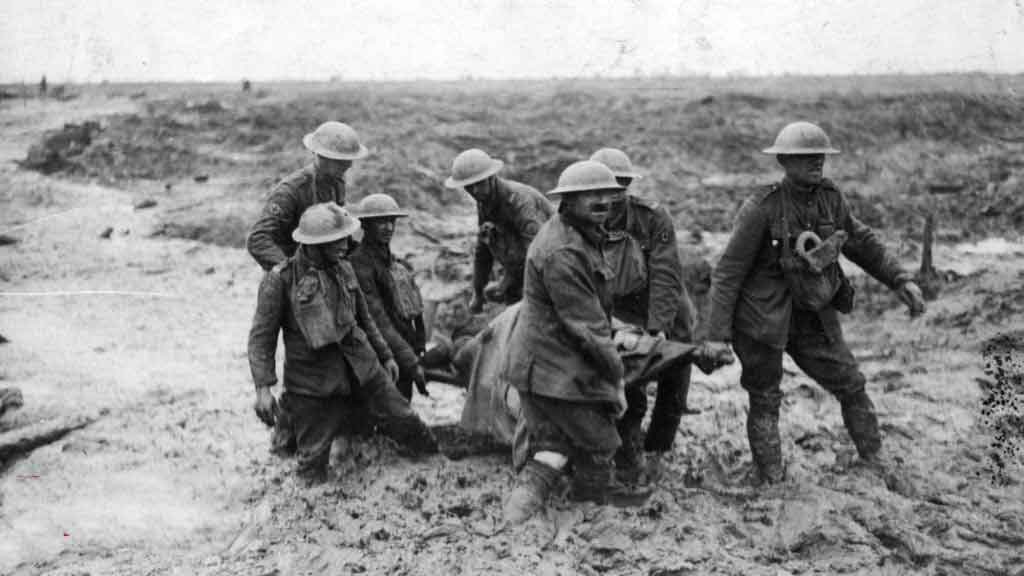 World War 1 – episode 4 – Rage: 1917. People have had enough of the war. Behind the scenes, uprisings are brewing, like the one that toppled the Tsar in Russia; on the front soldiers begin to mutiny as they did at Chemin des Dames in France. German submarine attacks in the Atlantic will finally pull the Americans into the war, but they arrive too late to help prevent the carnage of the Battle of Passchendaele.

What took place was officially known as the Third Battle of Ypres, but history recalls the horror in one word: Passchendaele. The name, along with the Somme, has come to symbolise the Great War for many. The Allied assault was launched in the early hours of 31 July 1917. Because of the torrential rain, the British and Canadian troops found themselves fighting not only the Germans but a quagmire of stinking mud that swallowed up men, horses and tanks.

After three months, one week and three days of brutal trench warfare, the Allies finally recaptured the village of Passchendaele – but by then around a third of a million British and Allied soldiers had been killed or wounded in some of the most horrific trench warfare of the conflict.

The Third Battle of Ypres, also known as the Battle of Passchendaele, was a campaign of the First World War, fought by the Allies against the German Empire. The battle took place on the Western Front, from July to November 1917, for control of the ridges south and east of the Belgian city of Ypres in West Flanders, as part of a strategy decided by the Allies at conferences in November 1916 and May 1917. Passchendaele lies on the last ridge east of Ypres, 5 mi (8.0 km) from Roulers (now Roeselare) junction of the Bruges (Brugge) to Kortrijk railway. The station at Roulers was on the main supply route of the German 4th Army. Once Passchendaele Ridge had been captured, the Allied advance was to continue to a line from Thourout (now Torhout) to Couckelaere (Koekelare).

World War 1 - episode 4 - Rage: 1917. People have had enough of the war. Behind the scenes, uprisings are brewing, like the one that toppled the Tsar in Russia

Adolf Hitler the Itinerary episode 1 – Assent of a Criminal