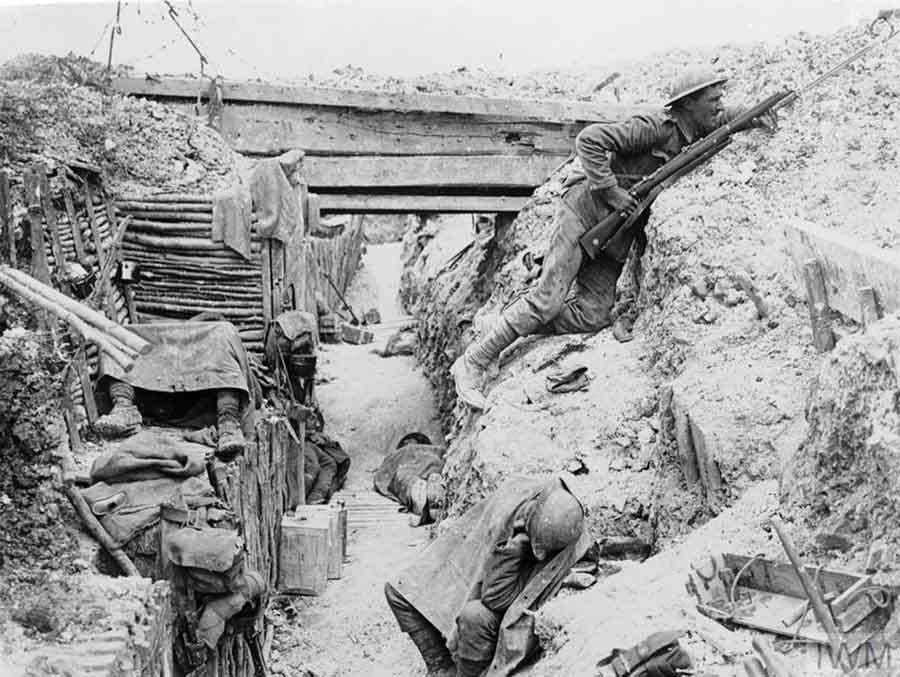 World War 1 – episode 3 – Hell:  1916 – The war is raging in Europe and stretches from the trenches in France to the Italian Alps and the Balkans, and beyond to the gates of the Eastern world.

The conflict becomes industrial, and millions of shells rain down on the battlefields; Verdun and the Somme are the deadliest battles in this second year of the war. Who can stop this infernal machine?

The Battle of Verdun, was fought from 21 February to 18 December 1916 on the Western Front in France. The battle was the longest of the First World War and took place on the hills north of Verdun-sur-Meuse. The German 5th Army attacked the defences of the Fortified Region of Verdun (RFV, Région Fortifiée de Verdun) and those of the French Second Army on the right (east) bank of the Meuse.

Poor weather delayed the beginning of the attack until 21 February but the Germans captured Fort Douaumont in the first three days. The advance then slowed for several days, despite inflicting many French casualties. By 6 March, ​20 1⁄2 French divisions were in the RFV and a more extensive defence in depth had been constructed. Philippe Pétain ordered no retreat and that German attacks were to be counter-attacked, despite this exposing French infantry to German artillery-fire.

By 29 March, French guns on the west bank had begun a constant bombardment of Germans on the east bank, causing many infantry casualties. The German offensive was extended to the left (west) bank of the Meuse, to gain observation and eliminate the French artillery firing over the river but the attacks failed to reach their objectives.

Battle of the Somme

The Battle of the Somme, also known as the Somme Offensive, was a battle of the First World War fought by the armies of the British Empire and French Third Republic against the German Empire. It took place between 1 July and 18 November 1916 on both sides of the upper reaches of the River Somme in France. The battle was intended to hasten a victory for the Allies. More than three million men fought in the battle and one million men were wounded or killed, making it one of the deadliest battles in human history.

The French and British had committed themselves to an offensive on the Somme during the Chantilly Conference in December 1915. The Allies agreed upon a strategy of combined offensives against the Central Powers in 1916 by the French, Russian, British and Italian armies, with the Somme offensive as the Franco-British contribution. Initial plans called for the French army to undertake the main part of the Somme offensive, supported on the northern flank by the Fourth Army of the British Expeditionary Force (BEF).

When the Imperial German Army began the Battle of Verdun on the Meuse on 21 February 1916, French commanders diverted many of the divisions intended for the Somme and the “supporting” attack by the British became the principal effort. The British troops on the Somme comprised a mixture of the remains of the pre-war Standing army, the Territorial Force and Kitchener’s Army, a force of wartime volunteers.

World War 1 - episode 3:  1916 - The war is raging in Europe and stretches from the trenches in France to the Italian Alps and the Balkans