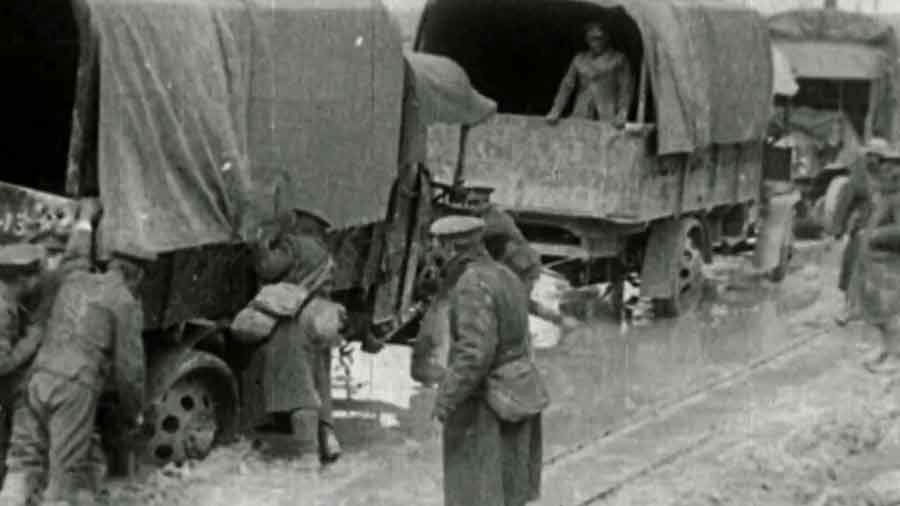 Britain’s Great War episode 3 – The Darkest Hour: Jeremy Paxman tells the story of how Britain edged close to defeat in the worst conflict it had ever known. Unearthing the wreck of a German U-boat in the Medway, he describes Germany’s attempt to starve the country into submission – could the Win the War Cookbook save the day?

Hoarders are put on trial as newspapers expose how the rich dine out on lobsters in Mayfair. Fear of moral corruption prompts the government to police the nation’s bedrooms. A full-length documentary film of fighting in the trenches breaks all box office records – but will it push a shocked British public into demanding peace at any price?

Neither side proved able to deliver a decisive blow for the next two years. Throughout 1915–17, the British Empire and France suffered more casualties than Germany, because of both the strategic and tactical stances chosen by the sides. Strategically, while the Germans mounted only one major offensive, the Allies made several attempts to break through the German lines.

In February 1916 the Germans attacked French defensive positions at the Battle of Verdun, lasting until December 1916. The Germans made initial gains, before French counter-attacks returned matters to near their starting point. Casualties were greater for the French, but the Germans bled heavily as well, with anywhere from 700,000 to 975,000 casualties suffered between the two combatants. Verdun became a symbol of French determination and self-sacrifice.

The Battle of the Somme was an Anglo-French offensive of July to November 1916. The opening day of the offensive (1 July 1916) was the bloodiest day in the history of the British Army, suffering 57,470 casualties, including 19,240 dead. The entire Somme offensive cost the British Army some 420,000 casualties. The French suffered another estimated 200,000 casualties and the Germans an estimated 500,000. Gun fire was not the only factor taking lives; the diseases that emerged in the trenches were a major killer on both sides. The living conditions made it so that countless diseases and infections occurred, such as trench foot, shell shock, blindness/burns from mustard gas, lice, trench fever, “cooties” (body lice) and the ‘Spanish flu‘.

Britain's Great War episode 3 - The Darkest Hour: Paxman tells the story of how Britain edged close to defeat in the worst conflict it had ever known.