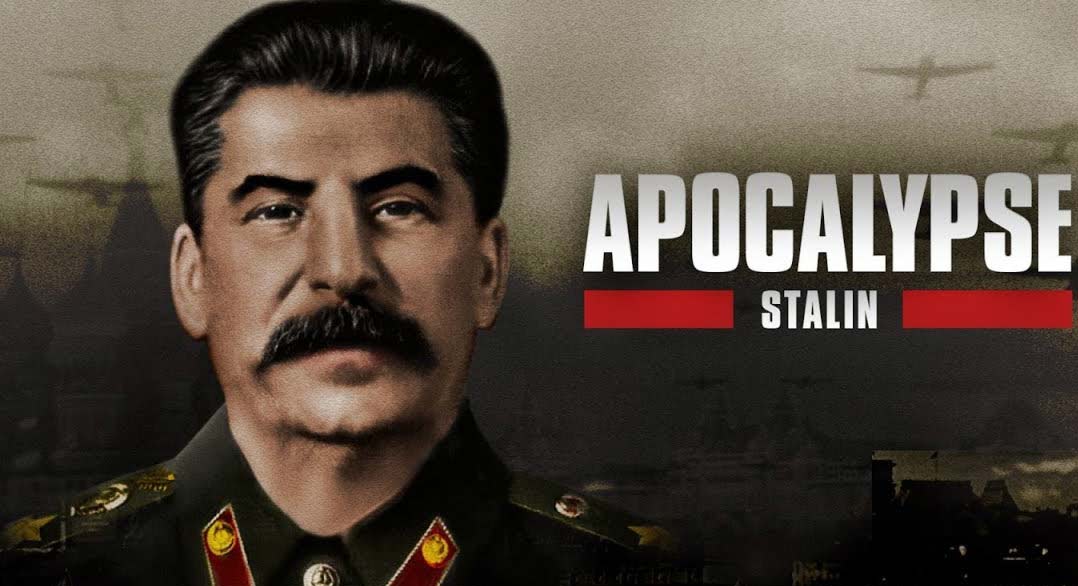 Apocalypse Stalin: Who was Stalin? The man who defeated Nazism? The ‘Little Father of the Peoples’? Or the greatest criminal of his time?

Episode covers Joseph Stalin’s early life and his early political activities which resulted in his rose to power with the help of Lenin.
June 1941 Hitler has thrown himself into a fight to the death against Stalin. Two decades earlier, in 1917, Joseph Jughashvili from Georgia is a member of Lenin’s Bolshevik Party, who has just seized power in Russia. The country is torn by civil war.

1942. After blocking the Germans right outside of Moscow, Stalin now faces Hitler’s second assault. The world’s fate will be decided in Stalingrad. Like in Leningrad, men, women and children, plunged into hell, are sacrificed. Will Stalin become Master of the World?

Part 3: Master of the World

1944: The Soviets continue on the path towards liberation. On the road to Berlin, they discover the horror of Hitler’s extermination camps. Stalin’s people have sacrificed the most: 9 million soldiers dead and 20 million civilians killed. Has he become Master of the World?

Joseph Vissarionovich Stalin was a Georgian revolutionary and Soviet politician who led the Soviet Union from the mid–1920s until 1953 as General Secretary of the Communist Party of the Soviet Union (1922–1952) and Premier (1941–1953). Initially presiding over a collective leadership as first among equals, by the 1930s he was the country’s de facto dictator. A communist ideologically committed to the Leninist interpretation of Marxism, Stalin formalised these ideas as Marxism–Leninism, while his own policies are known as Stalinism.

In Apocalypse Stalin, three 52-minute episodes, Isabelle Clarke and Daniel Costelle paint the portrait of one of the fiercest despots of the twentieth century, using archive film of the day. This footage has been perfectly restored, beautifully colorized and delivered in high definition. Starting with the fight to the death against Hitler, the series tells the story of the incredible rise to power of Joseph Jughashvili. This cobbler’s son from Georgia started with nothing and made his way up the ranks through various intrigues and crimes, ultimately rising to absolute power and adopting the moniker Stalin–‘Man Of Steel’ in Russian.

Title
Apocalypse Stalin: Who was Stalin? The man who defeated Nazism? The 'Little Father of the Peoples'? Or the greatest criminal of his time?
Description

Apocalypse Stalin: Who was Stalin? The man who defeated Nazism? The 'Little Father of the Peoples'? Or the greatest criminal of his time?