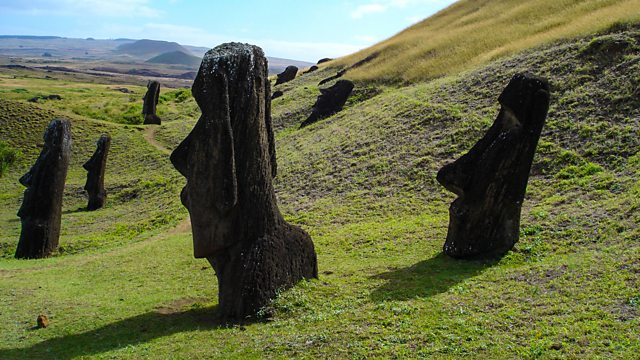 Around the World in 80 Treasures episode 1 - Peru to Brazil

Around the World in 80 Treasures episode 1 – Peru to Brazil: Dan visits the giant Moai, the ruins of Machu Picchu and the giant statue of Rio’s Christ. Cruickshank sets out on television’s most ambitious treasure hunt ever – to reveal the most beautiful and precious things made by man since the dawn of time.

Filmed over five months and visiting more than 40 countries, episode one takes Dan deep into the Amazonian rainforests of Brazil, to the peaks of the Peruvian mountains and to the distant wilds of Easter Island.

Surviving tempest-tossed seas, crocodile-infested rivers and the digestive challenge of eating fresh guinea pig, Dan’s choice of treasures ranges from the celebrated to the secret. His destinations in this programme – the giant Moai, the ruins of Machu Picchu and the giant statue of Rio’s Christ – are famed worldwide. Less well known but equally spectacular are the gold treasures of the human-sacrifice-loving Moche people, with the sinister gold spider necklace, and the largest mud-built city in world – the magical location of Chan Chan.

Never before has the variety and range of mankind’s creations around the world provided the stepping stones for such a momentous journey.

Moʻai, are monolithic human figures carved by the Rapa Nui people on Easter Island in eastern Polynesia between the years 1250 and 1500. Nearly half are still at Rano Raraku, the main moʻai quarry, but hundreds were transported from there and set on stone platforms called ahu around the island’s perimeter. Almost all moʻai have overly large heads three-eighths the size of the whole statue. The moʻai are chiefly the living faces (aringa ora) of deified ancestors (aringa ora ata tepuna). The statues still gazed inland across their clan lands when Europeans first visited the island in 1722, but all of them had fallen by the latter part of the 19th century.

The production and transportation of the more than 900 statues is considered a remarkable creative and physical feat. The tallest moʻai erected, called Paro, was almost 10 metres (33 ft) high and weighed 82 tonnes (80.7 tons). The heaviest moʻai erected was a shorter but squatter moʻai at Ahu Tongariki, weighing 86 tonnes (84.6 tons). One unfinished sculpture, if completed, would have been approximately 21 m (69 ft) tall, with a weight of about 145–165 tons. The moʻai were toppled in the late 18th and early 19th centuries, possibly as a result of European contact or internecine tribal wars.

Machu Picchu is a 15th-century Inca citadel, located in the Eastern Cordillera of southern Peru, on a 2,430-metre (7,970 ft) mountain ridge. It is located in the Machupicchu District within Urubamba Province above the Sacred Valley, which is 80 kilometres (50 mi) northwest of Cuzco. The Urubamba River flows past it, cutting through the Cordillera and creating a canyon with a tropical mountain climate.

Most archaeologists believe that Machu Picchu was constructed as an estate for the Inca emperor Pachacuti (1438–1472). Often mistakenly referred to as the “Lost City of the Incas”, it is the most familiar icon of Inca civilization. The Incas built the estate around 1450 but abandoned it a century later at the time of the Spanish conquest. Although known locally, it was not known to the Spanish during the colonial period and remained unknown to the outside world until American historian Hiram Bingham brought it to international attention in 1911.

Machu Picchu was built in the classical Inca style, with polished dry-stone walls. Its three primary structures are the Intihuatana, the Temple of the Sun, and the Room of the Three Windows. Most of the outlying buildings have been reconstructed in order to give tourists a better idea of how they originally appeared. By 1976, 30% of Machu Picchu had been restored and restoration continues.

Around the World in 80 Treasures episode 1 - Peru to Brazil: Dan visits the giant Moai, the ruins of Machu Picchu and the giant statue of Rio's Christ.