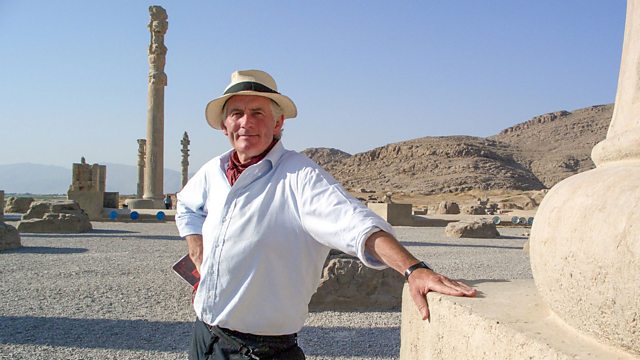 Around the World in 80 Treasures episode 4 - Japan to China

Around the World in 80 Treasures episode 4 – Japan to China: The ancient and the modern clash deliciously in Japan while the Terracotta army and the Great Wall of China boast the brilliance of ancient imperial China – Dan Cruickshank embarks on the fourth leg of his journey round the world to map man’s greatest creations in history.

The sword of a Samurai warrior is his first and slightly menacing choice, but Dan is captivated by the artistry employed in making this most beautiful instrument of death. By contrast, he finds solace and tranquillity in a Japanese temple and meditation garden.

In China, the tension of war and peace reasserts itself as he walks the Great Wall of China and contemplates the massed ranks of the Terracotta Army – 8,000 soldiers all individually modelled on real people from 2,000 years ago. Again, he finds peace in a unique creation – the empress of China’s marble boat – a miraculous and surreal vision on the waters of the Summer Palace lake.

As the smog of modern China descends, Dan finds his attempts to see the ancient porcelain of the Forbidden City challenged before making his escape to the space age world of high-rise Shanghai.

The Terracotta Army is a collection of terracotta sculptures depicting the armies of Qin Shi Huang, the first Emperor of China. It is a form of funerary art buried with the emperor in 210–209 BCE with the purpose of protecting the emperor in his afterlife.

The figures, dating from approximately the late third century BCE, were discovered in 1974 by local farmers in Lintong County, outside Xi’an, Shaanxi, China. The figures vary in height according to their roles, with the tallest being the generals. The figures include warriors, chariots and horses. Estimates from 2007 were that the three pits containing the Terracotta Army held more than 8,000 soldiers, 130 chariots with 520 horses, and 150 cavalry horses, the majority of which remained buried in the pits near Qin Shi Huang’s mausoleum. Other terracotta non-military figures were found in other pits, including officials, acrobats, strongmen, and musicians.

The construction of the tomb was described by historian Sima Qian (145–90 BCE) in Records of the Grand Historian, the first of China’s 24 dynastic histories, which was written a century after the mausoleum’s completion. Work on the mausoleum began in 246 BCE soon after Emperor Qin (then aged 13) ascended the throne, and the project eventually involved 700,000 conscripted workers. Geographer Li Daoyuan, writing six centuries after the first emperor’s death, recorded in Shui Jing Zhu that Mount Li was a favoured location due to its auspicious geology: “famed for its jade mines, its northern side was rich in gold, and its southern side rich in beautiful jade; the first emperor, covetous of its fine reputation, therefore chose to be buried there”.

Sima Qian wrote that the first emperor was buried with palaces, towers, officials, valuable artifacts and wondrous objects. According to this account, 100 flowing rivers were simulated using mercury, and above them the ceiling was decorated with heavenly bodies, below which were the features of the land. Some translations of this passage refer to “models” or “imitations”; however, those words were not used in the original text, which makes no mention of the terracotta army. High levels of mercury were found in the soil of the tomb mound, giving credence to Sima Qian’s account. Later historical accounts suggested that the complex and tomb itself had been looted by Xiang Yu, a contender for the throne after the death of the first emperor. However, there are indications that the tomb itself may not have been plundered.

The Forbidden City is a palace complex in Dongcheng District, Beijing, China, at the center of the Imperial City of Beijing. It is surrounded by numerous opulent imperial gardens and temples including the 22-hectare (54-acre) Zhongshan Park, the sacrificial Imperial Ancestral Temple, the 69-hectare (171-acre) Beihai Park, and the 23-hectare (57-acre) Jingshan Park.

The complex consists of 980 buildings, encompassing 8,886 rooms and covering 720,000 square metres (72 ha). The palace exemplifies the opulence of the residences of the Chinese emperor and the traditional Chinese palatial architecture, and has influenced cultural and architectural developments in East Asia and elsewhere. It is listed by UNESCO as the largest collection of preserved ancient wooden structures in the world. Since 2012, the Forbidden City has seen an average of 14 million visitors annually, and received more than 19 million visitors in 2019. The Forbidden City’s market value has been estimated at US$70 billion, making it both the world’s most valuable palace and the most valuable piece of real estate anywhere in the world.

Around the World in 80 Treasures episode 4 - Japan to China: The ancient and the modern clash deliciously in Japan

The Greek Islands with Julia Bradbury episode 5 – Rhodes and Symi