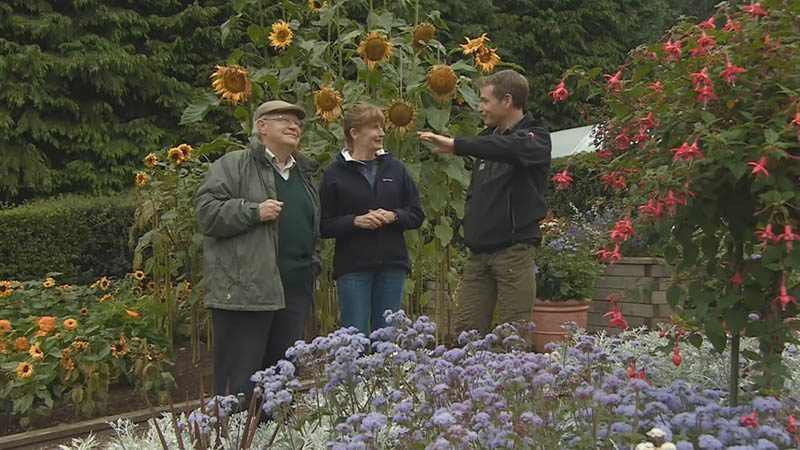 In Beechgrove Garden episode 22 2015: Jim Carole and Chris assessing how the new Michaelmas daisy collection has fared over the summer. Carole looks at her aubergines and peppers to see if they have managed to bear any fruit this season.

Jim visits Heathryfold Allotments in Aberdeen, whose multicultural plotters grow a range of vegetables and fruit from their homelands. Both Jim and Carole are on the island of Bute, to attend and enjoy the famous local Horticultural Society’s summer flower show.

Chris was in the Heather Garden. It is situated at the top of the Beechgrove garden at the head of the stream. This garden is about 15 years old and vast heathers dominate the space and the conifers have become swamped by them. Chris will be clearing out and revamping this garden in stages.

Chris was preparing a seed bed. He explained that organic matter had been lightly forked into the soil and he was carefully raking it to make a fine tilth ready for seed sowing. Chris and Carole had both collected seeds from around the garden – mostly from perennial plants. Seed should be collected on a dry day 6 to 8 weeks after the end of flowering. The seeds can either be stored in paper envelopes in a cool, dry place or be sown fresh on to the soil.

Carole stayed on Bute after last week’s roadshow to visit the Rothesay Horticultural Society’s annual summer flower show which like our Q&A last week, took place in the Rothesay Pavilion. Carole spoke to Jim Gordon who was sorting out a fine array of trophies. He picked out one and explained that this was the David Crawford Cup for novice gardeners.

In Beechgrove Garden episode 22 2015: Jim Carole and Chris assessing how the new Michaelmas daisy collection has fared over the summer.