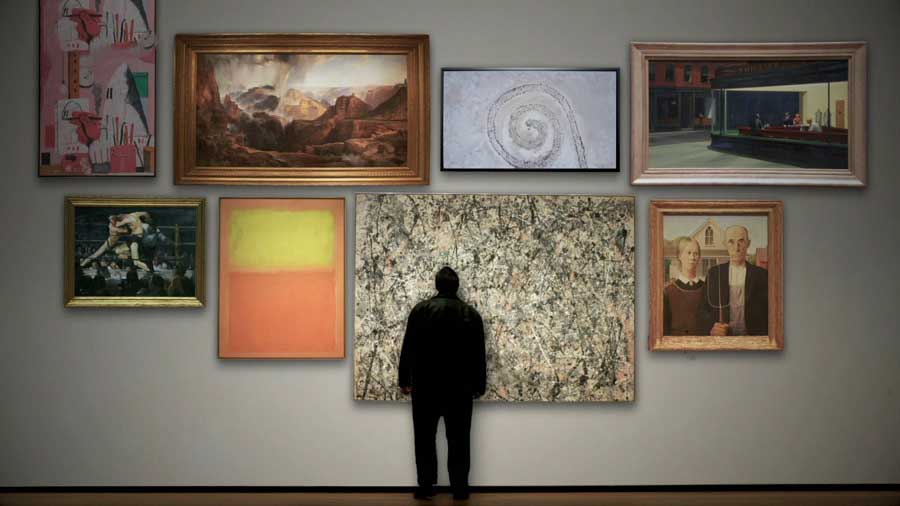 Big Sky, Big Dreams, Big Art: Made in the USA episode 3: This episode looks at America’s most controversial cultural territory – the interstitial America of small towns and trailer parks.

As his road trip takes him from Iowa to Tennessee, Waldemar Januszczak discovers how this much maligned territory had an immensely beneficial impact on American art. From the small town brilliance of Grant Wood, to the small town alienation of Edward Hopper, to the spooky Dust Bowl symbolism of Alexandre Hogue, interstitial America inspired much that was great. The film culminates in the brilliant assemblages of David Smith, the leading sculptor of abstract expressionism.

Grant DeVolson Wood was an American painter best known for his paintings depicting the rural American Midwest, particularly American Gothic (1930), which has become an iconic painting of the 20th century. Wood was born in rural Iowa, 4 mi (6 km) east of Anamosa, in 1891. His mother moved the family to Cedar Rapids after his father died in 1901.

Soon thereafter, Wood began as an apprentice in a local metal shop. After graduating from Washington High School, Wood enrolled in The Handicraft Guild, an art school run entirely by women in Minneapolis in 1910 (now a prominent artist collective in the city). He is said to have later returned to the Guild to paint American Gothic. A year later, Wood returned to Iowa, where he taught in a rural one-room schoolhouse. In 1913, he enrolled at the School of the Art Institute of Chicago and performed some work as a silversmith.

Edward Hopper was an American realist painter and printmaker. While he is best known for his oil paintings, he was equally proficient as a watercolorist and printmaker in etching. Both in his urban and rural scenes, his spare and finely calculated renderings reflected his personal vision of modern American life.

Hopper was born in 1882 in Nyack, New York, a yacht-building center on the Hudson River north of New York City. He was one of two children of a comfortably well-off family. His parents, of mostly Dutch ancestry, were Elizabeth Griffiths Smith and Garret Henry Hopper, a dry-goods merchant. Although not so successful as his forebears, Garrett provided well for his two children with considerable help from his wife’s inheritance. He retired at age forty-nine. Edward and his only sister Marion attended both private and public schools. They were raised in a strict Baptist home. His father had a mild nature, and the household was dominated by women: Hopper’s mother, grandmother, sister, and maid.

Big Sky, Big Dreams, Big Art: Made in the USA episode 3: This episode looks at America's most controversial cultural territory - the interstitial America of small towns and trailer parks.