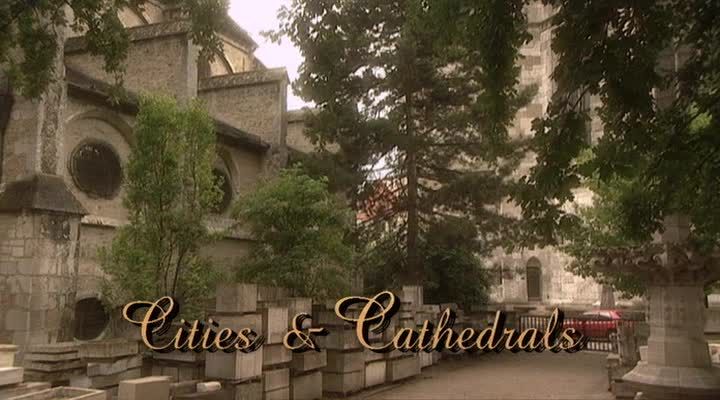 Europe in the Middle Ages episode 4 - Cities and Cathedrals

Europe in the Middle Ages episode 4 – Cities and Cathedrals: Historians considered for a long time the picturesque maze of alleyways in medieval towns to be construction planning gone haywire. New research reveals the surprising fact that many mediaeval towns were conceived on the drawing board by urban planners who were well versed in geometry, for the towns grew and offered a home to many people.

Even outsiders such as swindlers, beggars and charlatans found shelter, for the influence of the feudal lords ended before the town-gates. In the freedom of the towns, the guilds and bourgeois society flourished. Mechanical tower clocks heralded a new rhythm of life, the first universities were founded, trade and industry followed suit.

The Middle Ages were dark in the literal sense of the word: apart from precious wax, which hardly anyone could afford, there was in fact no other form of artificial light. Scholars begged God for light to enable them to pursue their studies. In fact, the ‘Dark Ages‘ between 800 and 1500 were a brilliant, dynamic time that paved the way for many achievements of our modern day world.

Medieval communes in the European Middle Ages had sworn allegiances of mutual defense (both physical defense and of traditional freedoms) among the citizens of a town or city. These took many forms and varied widely in organization and makeup.

Communes are first recorded in the late 11th and early 12th centuries, thereafter becoming a widespread phenomenon. They had greater development in central-northern Italy, where they became city-states based on partial democracy. At the same time in Germany they became free cities, independent from local nobility.

During the 10th century in several parts of Western Europe, peasants began to gravitate towards walled population centers, as advances in agriculture (the three-field system) resulted in greater productivity and intense competition. In central and northern Italy, and in Provence and Septimania, most of the old Roman cities had survived—even if grass grew in their streets—largely as administrative centers for a diocese or for the local representative of a distant kingly or imperial power. In the Low Countries, some new towns were founded upon long-distance trade, where the staple was the woolen cloth-making industry.

The sites for these ab ovo towns, more often than not, were the fortified burghs of counts, bishops or territorial abbots. Such towns were also founded in the Rhineland. Other towns were simply market villages, local centers of exchange.

The word “town” shares an origin with the German word Zaun, the Dutch word tuin, and the Old Norse tun. The original Proto-Germanic word, *tunan, is thought to be an early borrowing from Proto-Celtic *dunon (cf. Old Irish dun, Welsh din). The original sense of the word in both Germanic and Celtic was that of a fortress or an enclosure. Cognates of “town” in many modern Germanic languages designate a fence or a hedge.

In the ancient world, town life was well established, particularly in Greece and Rome. Ancient towns were busy trading centers. But after the fall of the Roman Empire in the west, trade with the east suffered, and town life declined. In the Early Middle Ages, most people in western Europe lived in scattered communities in the countryside.

By the High Middle Ages, towns were growing again. One reason for their growth was improvements in agriculture. Farmers were clearing forests and adopting better farming methods. As a result, they had a surplus of crops to sell in town markets. And because of these surpluses, not everyone had to farm to feed themselves. Another reason for the growth of towns was the revival of trade. Seaport towns, such as Venice and Genoa in Italy, served as trading centers for goods from the Middle East and Asia. Within Europe, merchants often traveled by river, and many towns grew up near these waterways.

Many merchants who sold their wares in towns became permanent residents. So did people practicing various trades. Some towns grew wealthier because local people specialized in making specific types of goods. For example, towns in Flanders (present-day Belgium and the Netherlands) were known for their fine woolen cloth. The Italian city of Venice was known for making glass. Other towns built their wealth on the banking industry that grew up to help people trade more easily.