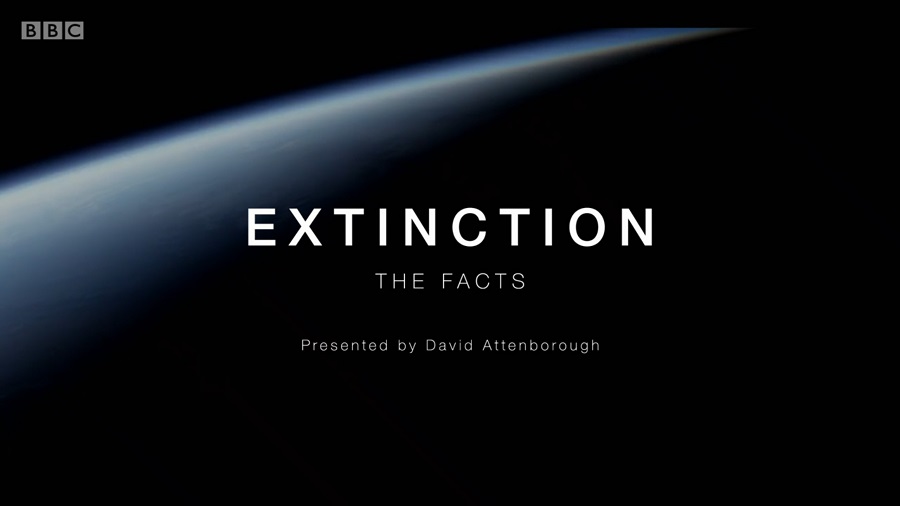 Extinction – The Facts: With a million species at risk of extinction, Sir David Attenborough explores how this crisis of biodiversity has consequences for us all, threatening food and water security, undermining our ability to control our climate and even putting us at greater risk of pandemic diseases.

Extinction is now happening up to 100 times faster than the natural evolutionary rate, but the issue is about more than the loss of individual species. Everything in the natural world is connected in networks that support the whole of life on earth, including us, and we are losing many of the benefits that nature provides to us. The loss of insects is threatening the pollination of crops, while the loss of biodiversity in the soil also threatens plants growth. Plants underpin many of the things that we need, and yet one in four is now threatened with extinction.

Last year, a UN report identified the key drivers of biodiversity loss, including over-fishing, climate change and pollution. But the single biggest driver of biodiversity loss is the destruction of natural habitats. Seventy-five per cent of Earth’s land surface (where not covered by ice) has been changed by humans, much of it for agriculture, and as consumers we may unwittingly be contributing towards the loss of species through what we buy in the supermarket.

Our destructive relationship with the natural world isn’t just putting the ecosystems that we rely on at risk. Human activities like the trade in animals and the destruction of habitats drive the emergence of diseases. Disease ecologists believe that if we continue on this pathway, this year’s pandemic will not be a one-off event.

Extinction is the termination of a kind of organism or of a group of kinds (taxon), usually a species. The moment of extinction is generally considered to be the death of the last individual of the species, although the capacity to breed and recover may have been lost before this point. Because a species’ potential range may be very large, determining this moment is difficult, and is usually done retrospectively. This difficulty leads to phenomena such as Lazarus taxa, where a species presumed extinct abruptly “reappears” (typically in the fossil record) after a period of apparent absence.

More than 99 percent of all species, amounting to over five billion species, that ever lived on Earth are estimated to have died out. It’s estimated there are currently around 8.7 million species of eukaryote globally, and possibly many times more if microorganisms, like bacteria, are included.

Through evolution, species arise through the process of speciation—where new varieties of organisms arise and thrive when they are able to find and exploit an ecological niche—and species become extinct when they are no longer able to survive in changing conditions or against superior competition. The relationship between animals and their ecological niches has been firmly established. A typical species becomes extinct within 10 million years of its first appearance, although some species, called living fossils, survive with little to no morphological change for hundreds of millions of years.

Extinction - The Facts:With a million species at risk of extinction, Sir David Attenborough explores how this crisis of biodiversity has consequences for us all

Canada the Story of Us – New Identity (1946 – 1970): Post WWII, marginalized Canadians fight for their rights. Canada experiences a boom time after the war, but not all are happy with the status quo.

Power of Art – Rembrandt: Despite being known as a portrait painter Rembrandt used his talent to push the boundaries of painting.