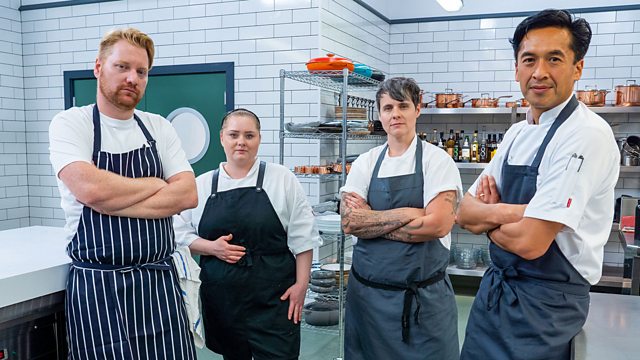 Great British Menu 2021 episode 22 – South West Starter: The regional heats conclude with the south west of England. Competing to represent the region at the finals next week are four chefs, three with restaurants in the south west of England. The other, Nick Beardshaw, is originally from Dorset but is now a head chef at Great British Menu alumnus Tom Kerridge’s latest London restaurant. Meanwhile, with two restaurants in Cornwall, chef patron Jude Kereama is back competing for a record fourth time in a bid to finally reach the finals.

Award-winning chef Elly Wentworth is head chef of a fine dining restaurant in Dartmouth, and as a veteran of competitions, she’s determined to win with her menu. They’re joined in the kitchen by another newcomer, Nat Tallents, a semi-finalist in the National Chef of the Year competition in 2020.

Presenter Andi Oliver welcomes them to the kitchen, where the theme for this year’s competition is a celebration of British invention and innovation. The chefs draw upon their region’s innovative past and present, with recipes inspired by paleontology and the many dinosaur discoveries on the Dorset coast, as well as its strong aeronautical heritage and current space research.

One of the four must leave the competition at the end of the episode. Which one that is will be decided by the veteran judge of this week’s competition, a previous winner who remains a surprise to the chefs until the moment they walk into the kitchen to taste their first course: canapes.