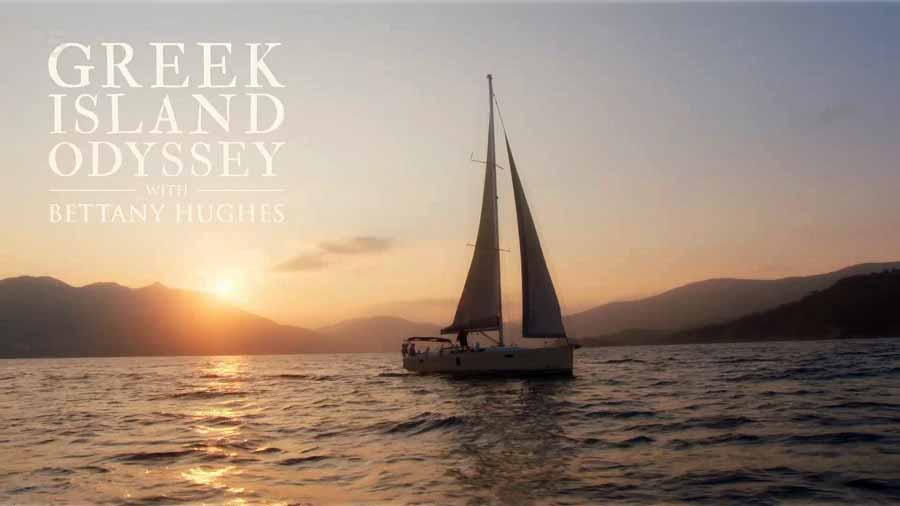 Greek Island Odyssey with Bettany Hughes episode 3: In Santorini, she visits a Minoan city preserved in time by one of the most violent volcanic eruptions in history. Bettany’s next port of call is Naxos, where in an abandoned marble quarry, she finds a genuinely monumental statue of the god that has lain there for thousands of years, before heading to a taverna to take part in some local festivities.

The presenter later arrives in Sifnos, where long-distance communications were mastered millennia before telegrams or telephones. The historian and classicist goes Greek island-hopping to explore their history from the time of the Ancients to the present day.

The devastating volcanic eruption of Thera around 1600 B.C. has become the most famous single event in the Aegean before the fall of Troy. It may have been one of the largest volcanic eruptions on Earth in the last few thousand years, with an estimated VEI (volcanic explosivity index) of 6 according to the last studies published in 2006, confirming the prior values. The violent eruption was centred on a small island just north of the existing island of Nea Kameni in the centre of the caldera; the caldera itself was formed several hundred thousand years ago by the collapse of the centre of a circular island, caused by the emptying of the magma chamber during an eruption.

It has been filled several times by ignimbrite since then, and the process repeated itself, most recently 21,000 years ago. The northern part of the caldera was refilled by the volcano, then collapsed once more during the Minoan eruption. Before the Minoan eruption, the caldera formed a nearly continuous ring with the only entrance between the tiny island of Aspronisi and Thera; the eruption destroyed the sections of the ring between Aspronisi and Therasia, and between Therasia and Thera, creating two new channels.

During the 8th and 7th centuries BC, Naxos dominated commerce in the Cyclades. Naxos was the first Greek city-state to attempt to leave the Delian League circa 476 BC; Athens quickly squashed the notion and forcibly removed all military naval vessels from the island’s control. Athens then demanded all future payments from Naxos in the form of gold rather than military aid. Herodotus describes Naxos circa 500 BC as the most prosperous Greek island.

In 502 BC, an unsuccessful attack on Naxos by Persian forces led several prominent men in the Greek cities of Ionia to rebel against the Persian Empire in the Ionian Revolt, and then to the Persian War between Greece and Persia.

Greek Island Odyssey with Bettany Hughes episode 3: In Santorini, she visits a Minoan city preserved in time by one of the most violent volcanic eruptions in history.