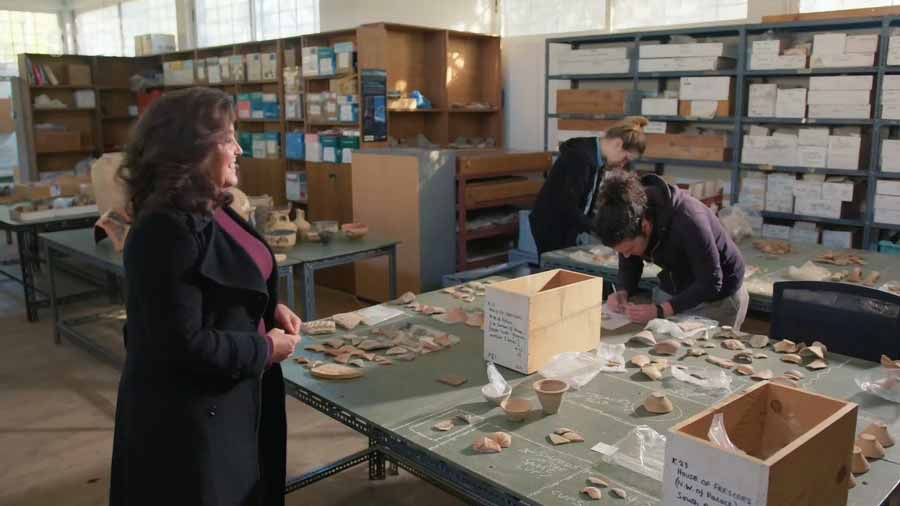 Greek Island Odyssey with Bettany Hughes episode 4: Arriving in Crete just as a storm hits, the historian is lucky to reach `the big island” before the seas become impassable and the annual Christian Epiphany festivities are hampered.

She travels to the ruins of the ancient city of Knossos, synonymous with English archaeologist Arthur Evans who unearthed much of its palace over 100 years ago, beneath which the legendary King Minos is said to have kept a crazed half-man, half-bull – the Minotaur. Bettany meets Professor Stampolidis, whose ground-breaking archaeological discoveries prove links between ancient legend and historical reality.

In Greece, Cyprus and the Greek diaspora throughout the world, the feast is called the Theophany, or colloquially Phōta. It is the “Great Celebration” or Theotromi. In some regions of Macedonia (West) it is the biggest festival of the year. The Baptism of Christ symbolizes the rebirth of man, its importance is such that until the fourth century Christians celebrated New Year on this day. Customs revolve around the Great Blessing of the Waters.

It marks the end of the traditional ban on sailing, as the tumultuous winter seas are cleansed of the mischief-prone kalikántzaroi, the goblins that try to torment God-fearing Christians through the festive season. During this ceremony, a cross is thrown into the water, and the men compete to retrieve it for good luck. The Phota form the middle of another festive triduum, together with Epiphany Eve, when children sing the Epiphany carols, and the great feast of St. John the Baptist (January 7 and eve), when the numerous Johns and Joans celebrate their name-day.

Knossos is the largest Bronze Age archaeological site on Crete and has been called Europe’s oldest city. Settled as early as the Neolithic period, the name Knossos survives from ancient Greek references to the major city of Crete. The palace of Knossos eventually became the ceremonial and political centre of the Minoan civilization and culture. The palace was abandoned at some unknown time at the end of the Late Bronze Age, c. 1,380–1,100 BC. The reason why is unknown, but one of the many disasters that befell the palace is generally put forward.

In Greek mythology, the Minotaur is a mythical creature portrayed in Classical times with the head and tail of a bull and the body of a man or, as described by Roman poet Ovid, a being “part man and part bull”. He dwelt at the center of the Labyrinth, which was an elaborate maze-like construction designed by the architect Daedalus and his son Icarus, on the command of King Minos of Crete. The Minotaur was eventually killed by the Athenian hero Theseus.

Greek Island Odyssey with Bettany Hughes episode 4: Arriving in Crete just as a storm hits, the historian is lucky to reach `the big island"