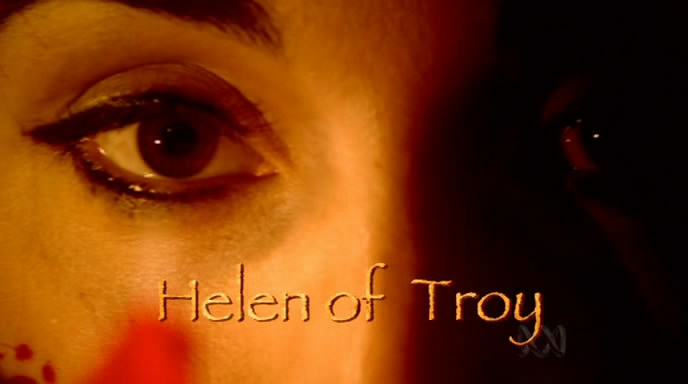 Helen of Troy: Bettany Hughes embarks on a journey across the eastern Mediterranean to discover the truth about HELEN OF TROY, the woman blamed for causing the Trojan War, a conflict that resulted in countless deaths. Following weapons experts, the two-hour film shows how the conflict in Helens name would have been fought, unraveling the reality from the myths and putting flesh on the “face that launched a thousand ships”, exploring the ways the Greeks made love and war circa 1300 B.C.

For 3,000 years, the woman known as Helen of Troy has been both the ideal symbol of beauty and a reminder of the terrible power beauty can wield. In her search for the identity behind this mythic figure, acclaimed historian Bettany Hughes uses Homer’s account of Helen’s life to frame her own investigation. Tracing the cultural impact that Helen has had on both the ancient world and Western civilization, Hughes explores Helen’s role and representations in literature and in art throughout the ages.

As soon as men began to write, they made Helen of Troy their subject; for close on three thousand years she has been both the embodiment of absolute female beauty and a reminder of the terrible power that beauty can wield. Because of her double marriage to the Greek King Menelaus and the Trojan Prince Paris, Helen was held responsible for an enduring enmity between East and West. For millennia she has been viewed as an exquisite agent of extermination. But who was she?

Combining a thorough analysis of the Iliad and other archaeological artefacts, Hughes paints a colourful portrait of an age of violence and passion, contextualising Helen of Troy in her ancient setting. During her own voyage in Helen’s wake, Bettany Hughes sorts the reality from the myths told about Helen. She travels from the city where it is said Helen was born – Sparta in the mountains of Greece – to the archaeological site in modern Turkey that will be forever linked with the war fought in Helen’s name: Troy.

Helen of Troy: Bettany Hughes embarks on a journey across the eastern Mediterranean to discover the truth about HELEN OF TROY