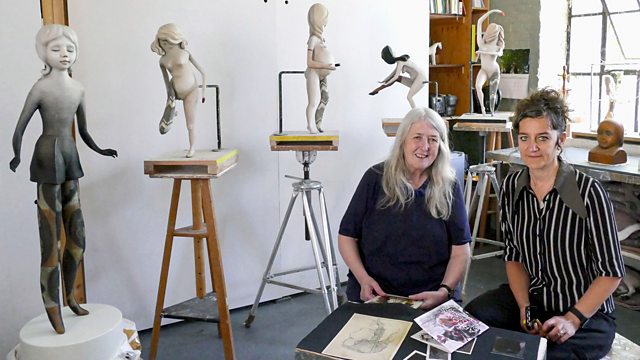 Mary Beard’s Shock of the Nude episode 2: Mary Beard takes on one of the foundation stones of western art – the nude.

Mary gives a deeply personal take on how artists have depicted the naked body, from the ancient Greeks to the taboo-busting painters and sculptors of today. Just why are artists so interested in nudity? And what can art reveal about our own attitudes to the body? Art critics over the centuries have often made lofty claims about the nude – playing down or refusing to acknowledge the erotic and even pornographic nature of some of the great works of western art. Mary argues we must not forget the edgy and dangerous nature of the nude – ultimately the reason it remains a magnetic subject for artists and viewers alike.

In this episode, Mary looks at how artists have challenged the idea of the body beautiful, artistic nudes that provoke viewers to think about the most fundamental questions about being human.

Mary begins with the sculpture Alison Lapper Pregnant. When this figure of a disabled artist by Marc Quinn was installed in Trafalgar Square, it caused a sensation – challenging public expectations about what a nude sculpture in a classical style should be. Mary then examines a nude she argues is rarely seen for what it is – the naked (or nearly naked) body of Jesus Christ, in the company of former British Museum director Neil MacGregor. Together, they look at one of the most surprising images of Jesus you have probably ever seen.

Nudes in the western canon are traditionally white and living – but not all of them: Theodore Gericault’s masterpiece Raft of the Medusa is an image of torment and misery, with its sweep of dead and dying figures – and it also contains the figure of a black man, very much alive, waving heroically to a distant ship. With the help of Dr Denise Murrell, Mary reveals the importance of this image in the context of so many racially stereotyped images of the black body and discusses how the black nude was reimagined in the 20th century.

The naked body can also represent the inner state of mind – as seen in the works of the extraordinary early 20th-century Viennese artist Egon Schiele. Mary also looks at Lucian Freud, who reinvented the nude in the mid-20th century with his intimate, fleshy portraits of men and women. He has been described by one former model as predatory, and Mary speaks with another, Cozette McCreery, on how she felt about being the subject of his legendary scrutiny.

Finally, Mary looks at what society’s increased awareness that gender is not a binary matter of male or female but a much more fluid concept means for the nude in art. She looks back to classical times, to the ancient hermaphrodite, reminding us that this is by no means a new discovery, before talking with a trans life model about the potential of art to affirm a positive body image. Mary speaks to artist Ajamu, whose work features in the groundbreaking Kiss My Genders exhibition – a glorious celebration of sexual and gender diversity in which the naked body proved without doubt that it still has a central role to play in art.

Mary Beard’s Shock of the Nude episode 2: Mary Beard takes on one of the foundation stones of western art - the nude.

The Pacific In The Wake of Captain Cook with Sam Neill ep. 1