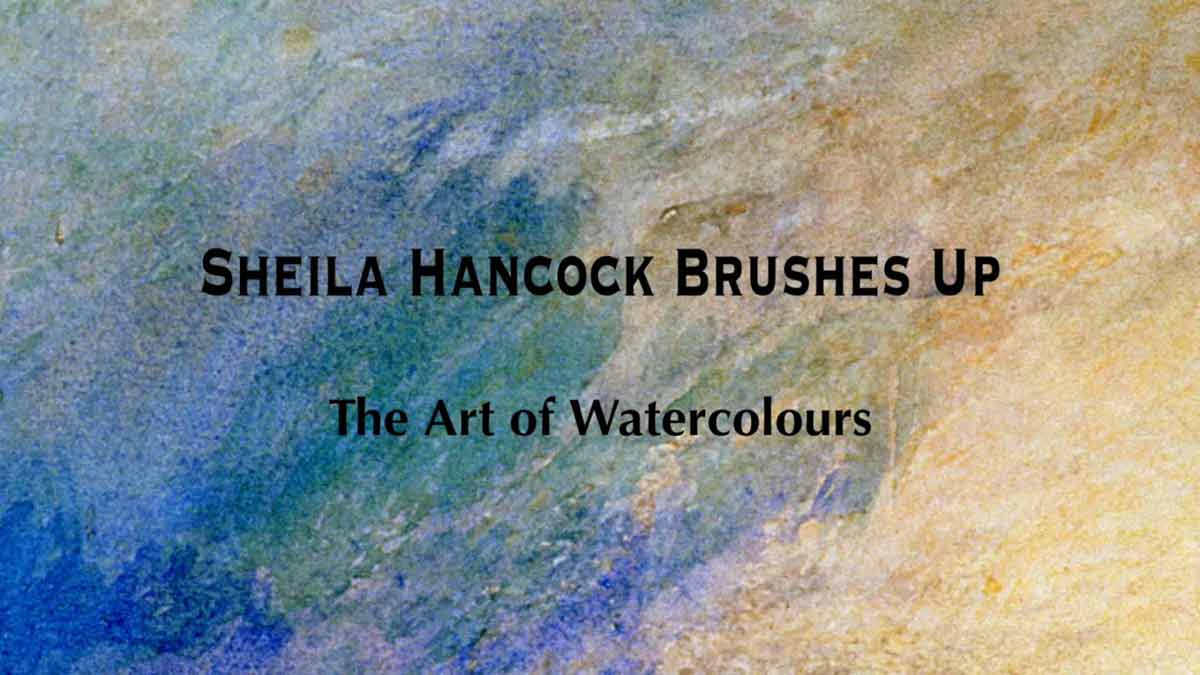 Sheila Hancock Brushes Up - The Art of Watercolours

Sheila Hancock Brushes Up – The Art of Watercolours: Watercolours have always been the poor relation of oil painting. And yet the immediacy and freedom of painting in watercolours have made them the art of adventure and action – even war. It has been an art form the British have pioneered, at first celebrating the greatest landscapes of Europe and then recording the exotic beauty of the British Empire.

Sheila Hancock, an ardent fan of watercolours since her childhood and whose father was an amateur watercolourist, sets out on a journey to trace the art form. It takes in the glories of the Alps, the city of Venice and deepest India as she tracks the extraordinary story of professional and amateur watercolourists, and reveals some of the most beautiful and yet little-known pictures.

Watercolours, also aquarelle (French, from Italian diminutive of Latin aqua “water”), is a painting method in which the paints are made of pigments suspended in a water-based solution. Watercolor refers to both the medium and the resulting artwork. Aquarelles painted with water-soluble colored ink instead of modern water colors are called “aquarellum atramento” (Latin for “aquarelle made with ink”) by experts. However, this term has been more and more passing out of use.

The traditional and most common support—material to which the paint is applied—for watercolors paintings is watercolor paper. Other supports include papyrus, bark papers, plastics, vellum, leather, fabric, wood and watercolor canvas (coated with a gesso that is specially formulated for use with watercolours). Watercolor paper is often made entirely or partially with cotton. This gives the surface the appropriate texture and minimizes distortion when wet. Watercolour papers are usually cold pressed papers, and gives better texture and look with GSM between 200 and 300. Watercolors are usually translucent, and appear luminous because the pigments are laid down in a pure form with few fillers obscuring the pigment colors. Watercolours can also be made opaque by adding Chinese white.

Watercolour paint is an ancient form of painting. In East Asia, watercolor painting with inks is referred to as brush painting or scroll painting. In Chinese, Korean and Japanese painting it has been the dominant medium, often in monochrome black or browns, often using inksticks or other pigments. India, Ethiopia and other countries have long watercolor painting traditions as well.

American artists in the early 19th century seemed to regard watercolor primarily as a sketching tool in preparation for the “finished” work in oil or engraving.

Joseph Mallord William Turner RA, known in his time as William Turner, was an English Romantic painter, printmaker and watercolourist. Turner is known for his expressive colourisations, imaginative landscapes and turbulent, often violent marine paintings. He left behind more than 550 oil paintings, 2,000 watercolours, and 30,000 works on paper. He was championed by the leading English art critic John Ruskin from 1840, and is today regarded as having elevated landscape painting to an eminence rivalling history painting.

Turner was born in Maiden Lane, Covent Garden, London, to a modest lower-middle-class family. He lived in London all his life, retaining his Cockney accent and assiduously avoiding the trappings of success and fame. A child prodigy, Turner studied at the Royal Academy of Arts from 1789, enrolling when he was 14, and exhibited his first work there at 15. During this period, he also served as an architectural draftsman. He earned a steady income from commissions and sales, which due to his troubled, contrary nature, were often begrudgingly accepted. Turner opened his own gallery in 1804 and became professor of perspective at the academy in 1807, where he lectured until 1828, although he was viewed as profoundly inarticulate. He travelled to Europe from 1802, typically returning with voluminous sketchbooks.

Title
Sheila Hancock Brushes Up - The Art of Watercolours
Description

Sheila Hancock Brushes Up - The Art of Watercolours: Watercolours have always been the poor relation of oil painting.