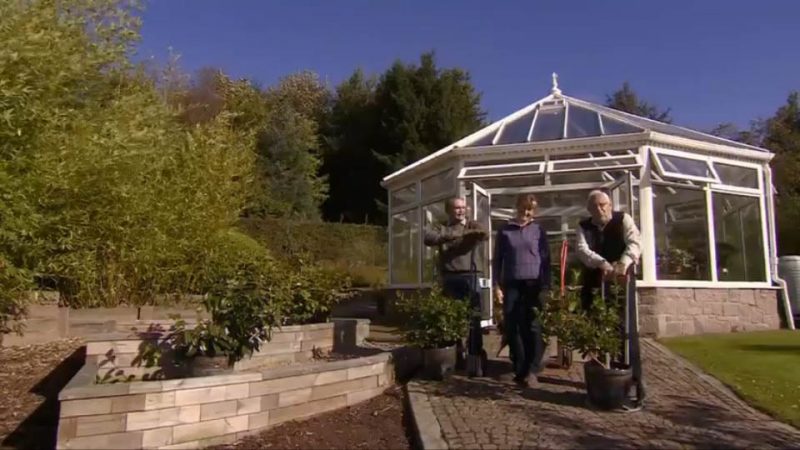 There’s a wee chill in the air in the Beechgrove Garden episode 23 2016 and Jim decides to take the Camellias inside after their summer holidays outdoors. Carole and George are thinking ahead to spring, taking half-hardy perennial cuttings and planning a spring bedding display.

Jim takes a final trip to Tillicoultry Allotments and this time it’s harvest thanksgiving. Jim also visits Gordon Castle garden near Elgin, where the team are restoring one of the oldest walled-kitchen gardens in Scotland.

What a cracking day it was this week in the Beechgrove Garden – a lovely sunny autumn day, but of course with autumn arriving so do the lower overnight time temperatures. At Beechgrove a low of 5.2°C has been recorded, meanwhile, George and Jim have had temperatures down to 7°C in their own gardens. For Carole and Bob, the sound man, it has been as low as 3°C.

It was therefore time to bring in the Camellias for winter protection into the unheated conservatory. They were a nice shape because they had been pruned earlier in the season. A regular ericaceous feed and sequestered iron has kept them healthy and stopped the yellowing of the leaves. Regular watering over the summer months also prevents bud drop in the spring.

Camellias must have plenty of water throughout April to October, the critical time for watering is when next year’s flower buds are forming, drought anytime in this period will result in poor flowering in the following spring. Ideally you should use rainwater which is slightly acidic.

In the Trials Plot, it was time to lift the summer bedding which has given us a fabulous display this year – even though the cold weeks in early summer did delay the start of flowering a little. All of these bedding plants are half hardy perennials. As such it is too late to take cuttings from these as this should have been done in July
or August. The plants can however be lifted, potted up and used as stock plants to take cuttings from next spring.

It was time to get the spring bedding in for next year’s display. To prepare the soil first of all, dig it over to a spade’s depth. Beechgrove compost was added to raise the fertility of the soil. The ground was then raked over and firmed to a fine tilth.

At Beechgrove there are often spare plants left after our various gardening projects over the season. Rather than just leaving them in pots over winter, George had a barrow full which he had decided to plant randomly in the Wild Wood.