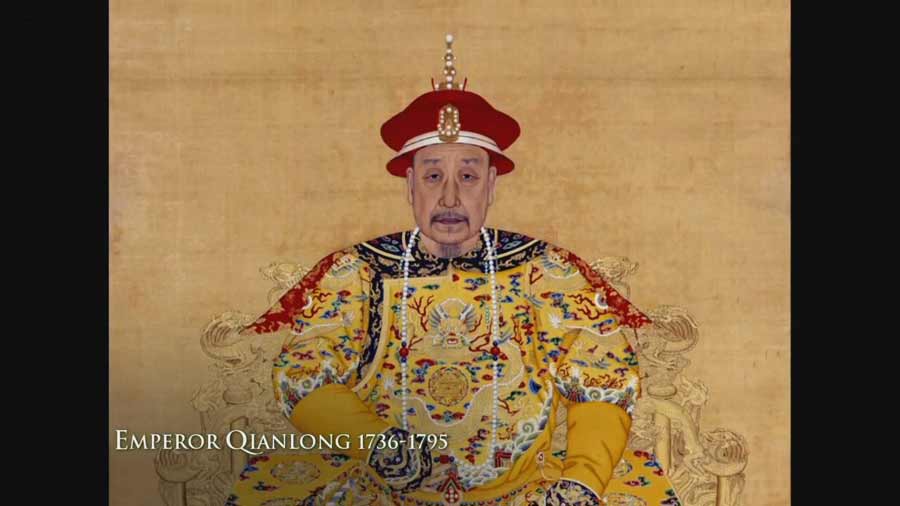 The Story of China episode 5 - The Last Empire

The Story of China episode 5 – The Last Empire: Michael Wood looks at China’s Qing empire, which lasted from 1644 to 1912. Under the Qing, China doubled in size and became arguably the world’s greatest economy.

China’s last empire, the Qing, lasted from 1644 to 1912. It began in violence and war as the Manchus swept down from the north, but invaders became emperors, with three generations of one family ruling the country. Among them, Michael Wood argues, was China’s greatest emperor – Kangxi.

Under the Qing, China doubled in size to include Xinjiang in the far west, as well as Mongolia and Tibet, creating the essential shape of China today. The new dynasty tolerated a diversity of cultures and religions, including Islam. In Kaifeng, Michael visits a women’s mosque with a female imam, a delightful scene that ends with laughter and selfies!

The Qing also undertook huge cultural enterprises. At a traditional printing house where the wood blocks are hand-carved, we see how the Complete Tang Poems were reproduced – all 48,000 of them. We travel through the wintry countryside to a remote village where a hardy audience watch open-air opera in the snow and visit a painter’s studio, and ‘storytelling’ houses in Yangzhou.

In the 18th century, China was arguably the greatest economy in the world, and we get a fabulous sense of the rich culture that came with prosperity. But then came the clash with the British, in the first Opium War, when a British expedition destroyed the Qing navy and extracted territory and trading rights. We leave with a glimpse of the future. ‘Every dynasty has risen and declined,’ says Michael, ‘and has needed new life to regenerate, and this time the catalyst was the British.’ Among the ports China ceded was an almost uninhabited island, Hong Kong, one of today’s greatest financial centres, and Shanghai, a small town then but now one of the greatest cities in world.

The Qing dynasty, officially the Great Qing was the last imperial dynasty of China. It was established in 1636, and ruled China proper from 1644 to 1911. It was preceded by the Ming dynasty and succeeded by the Republic of China. The Qing multi-cultural empire lasted for almost three centuries and formed the territorial base for modern China. It was the fifth largest empire in world history.

The dynasty was founded by the Manchu Aisin Gioro clan in Manchuria. In the late sixteenth century, Nurhaci, originally a Ming vassal, began organizing “Banners”, military-social units that included Manchu, Han, and Mongol elements. Nurhaci united Manchu clans and officially proclaimed the Later Jin dynasty in 1616. His son Hong Taiji began driving Ming forces out of the Liaodong Peninsula and declared a new dynasty, the Qing, in 1636.

The Kangxi Emperor (5 May 1654 – 20 December 1722), personal name Xuanye, was the fourth Emperor of the Qing dynasty, and the second Qing emperor to rule over China proper.

The Kangxi Emperor’s reign of 61 years (from 1661 until 1722) makes him the longest-reigning emperor in Chinese history (although his grandson, the Qianlong Emperor, had the longest period of de facto power) and one of the longest-reigning rulers in the world. However, since he ascended the throne at the age of seven, actual power was held for six years by four regents and his grandmother, the Grand Empress Dowager Xiaozhuang.

The Kangxi Emperor is considered one of China’s greatest emperors. He suppressed the Revolt of the Three Feudatories, forced the Kingdom of Tungning in Taiwan and assorted Mongol rebels in the North and Northwest to submit to Qing rule, and blocked Tsarist Russia on the Amur River, retaining Outer Manchuria and Outer Northwest China.

Title
The Story of China episode 5 - The Last Empire
Description

The Story of China episode 5 - The Last Empire: Michael Wood looks at China's Qing empire, which lasted from 1644 to 1912. Under the Qing, China doubled in size

The Pacific War in Color episode 5