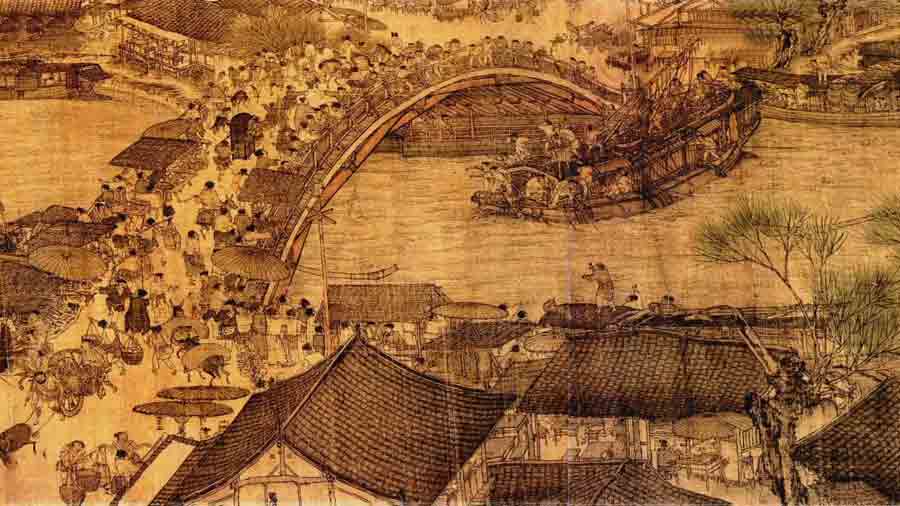 The Story of China episode 3 - The Golden Age

The Story of China episode 3 – The Golden Age: This episode tells the tale of what’s broadly considered China’s most creative dynasty – the Song (960-1279). Michael Wood heads to the city of Kaifeng, the greatest city in the world before the 19th century.

Here in Twin Dragon Alley, locals tell him the legend of the baby boys who became emperors. He explores the ideas and inventions that made the Song one of greatest eras in world culture, helped by China’s most famous work of art, the Kaifeng scroll, which shows the life of the city in around 1120. A chef makes Michael a recipe from a Song cookbook, while a guide to ‘how to live happy, healthy lives for old people’, published in 1085 and still in print, is discussed with local women doing their morning exercises. The Song was also a great era for scientific advance in China. Michael steers a huge working replica of an astronomical clock, made by China’s Leonardo da Vinci. Then at a crunch Chinese Premier League match, Michael tells us the Chinese invented football!

The Story of China episode 3 – The Golden Age

The golden age of the northern Song ended in 1127, when invaders sacked Kaifeng, but they survived in the south. At their new capital, Hangzhou, Wood joins locals dancing by the West Lake, while in the countryside he meets Mr Xie with his records of 40 generations of ancestors.

The final defeat of the Song took place in a naval battle in the estuary of the Pearl River in 1279. When all was lost, rather than surrender to the Mongols, a loyal minister jumped into the sea with the young boy emperor in his arms. ‘So ended the glory of the Song’, Wood concludes, ‘but a new age would arise… as in China, it always has!’.

The Song dynasty was an imperial dynasty of China that began in 960 and lasted until 1279. The dynasty was founded by Emperor Taizu of Song following his usurpation of the throne of the Later Zhou, ending the Five Dynasties and Ten Kingdoms period. The Song often came into conflict with the contemporaneous Liao, Western Xia and Jin dynasties to its north. It was eventually conquered by the Mongol-led Yuan dynasty. The Song government was the first in world history to issue banknotes or true paper money nationally and the first Chinese government to establish a permanent standing navy. This dynasty also saw the first known use of gunpowder, as well as the first discernment of true north using a compass.

Title
The Story of China episode 3 - The Golden Age
Description

The Story of China episode 3 - The Golden Age: This episode tells the tale of what's broadly considered China's most creative dynasty - the Song (960-1279).

Adolf Hitler the Itinerary episode 1 – Assent of a Criminal