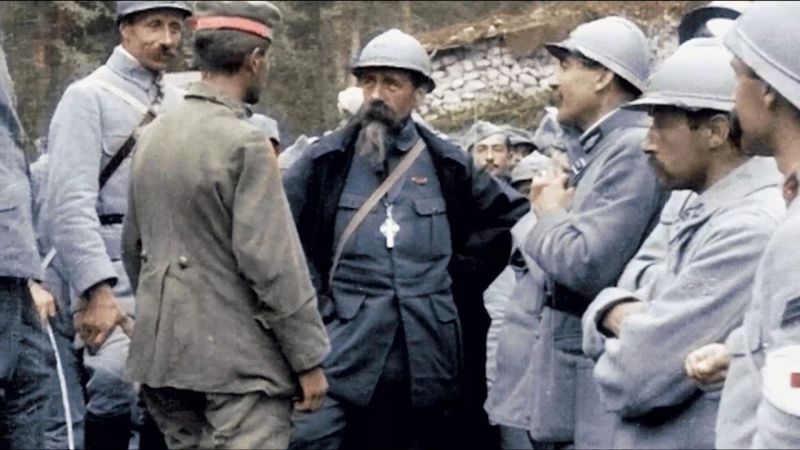 Verdun part 2 – The Illusion: Under the new commander of Verdun, General Petain, the French army tries to block the invasion. In the Somme, the Allies finally attack on July 1, 1916, but the assault turns into a disaster and put Verdun back at the center of all hopes and concerns. The French army counterattacks and wins the battle. But how many lives were sacrificed?

A gripping and shocking documentary composed of numerous colorized archive footage. Apocalypse: Verdun takes us to the infamous and bloody battle of Verdun that occurred in February 1916, when World War I had been raging for two years. The battle of Verdun, the largest confrontation between German and French forces during the war, which was fought for 300 days over 20 kilometers of front line.

The Battle of Verdun was fought from 21 February to 18 December 1916 on the Western Front in France. The battle was the longest of the First World War and took place on the hills north of Verdun-sur-Meuse. The German 5th Army attacked the defences of the Fortified Region of Verdun (RFV, Région Fortifiée de Verdun) and those of the French Second Army on the right (east) bank of the Meuse.

Poor weather delayed the beginning of the attack until 21 February but the Germans captured Fort Douaumont in the first three days. The advance then slowed for several days, despite inflicting many French casualties. By 6 March, ​20 1⁄2 French divisions were in the RFV and a more extensive defence in depth had been constructed.

Philippe Pétain ordered no retreat and that German attacks were to be counter-attacked, despite this exposing French infantry to German artillery-fire. By 29 March, French guns on the west bank had begun a constant bombardment of Germans on the east bank, causing many infantry casualties. The German offensive was extended to the left (west) bank of the Meuse, to gain observation and eliminate the French artillery firing over the river but the attacks failed to reach their objectives.

In 2013, Paul Jankowski wrote that since the beginning of the war, French army units had produced numerical loss states (états numériques des pertes) every five days for the Bureau of Personnel at GQG. The Health Service (Service de Santé) at the Ministry of War received daily counts of wounded taken in by hospitals and other services but casualty data was dispersed among regimental depots, GQG, the Registry Office (État Civil), which recorded deaths, the Service de Santé, which counted injuries and illnesses, and Renseignements aux Familles (Family Liaison), which communicated with next of kin.

Regimental depots were ordered to keep fiches de position (position sheets) to record losses continuously and the Première Bureau of GQG began to compare the five-day états numériques des pertes with the records of hospital admissions. The new system was used to calculate losses back to August 1914, which took several months; the system had become established by February 1916. The états numériques des pertes were used to calculate casualty figures published in the Journal Officiel, the French Official History and other publications.

The German armies compiled Verlustlisten (loss lists) every ten days, which were published by the Reichsarchiv in the deutsches Jahrbuch of 1924–1925. German medical units kept detailed records of medical treatment at the front and in hospital and in 1923 the Zentral Nachweiseamt (Central Information Office) published an amended edition of the lists produced during the war, incorporating medical service data not in the Verlustlisten.

Monthly figures of wounded and ill servicemen that received medical treatment were published in 1934 in the Sanitätsbericht (Medical Report). Using such sources for comparison is difficult, because the information recorded losses over time, rather than place. Losses calculated for a battle could be inconsistent, as in the Statistics of the Military Effort of the British Empire during the Great War 1914–1920 (1922). In the early 1920s, Louis Marin reported to the Chamber of Deputies but could not give figures per battle, except for some by using numerical reports from the armies, which were unreliable unless reconciled with the system established in 1916.

Verdun has become for the French the representative memory of World War I, comparable to how the Battle of the Somme is viewed in the United Kingdom and Canada. Antoine Prost wrote, “Like Auschwitz, Verdun marks a transgression of the limits of the human condition”. From 1918 to 1939, the French expressed two memories of the battle. One was a patriotic view embodied in memorials built on the battlefield and the Nivelle quote “They shall not pass”. The other was the memory of the survivors who recalled the death, suffering and sacrifice of others.

Verdun soon became a focal point for commemorations of the war. In 1920, a ceremony was held in the citadel of Verdun to choose a body to bury in the Tomb of the Unknown Soldier at the Arc de Triomphe. Six destroyed villages in the area were not rebuilt, but were given special status as uninhabited communes of Beaumont-en-Verdunois, Bezonvaux, Cumières-le-Mort-Homme, Fleury-devant-Douaumont, Haumont-près-Samogneux and Louvemont-Côte-du-Poivre.

Alain Denizot included period photographs that show overlapping shell craters in an area of about 100 km2 (39 sq mi). Forests planted in the 1930s have grown up and hide most of the Zone rouge (Red Zone) but the battlefield remains a vast graveyard, containing the mortal remains of over 100,000 missing soldiers, unless discovered by the French Forestry Service and laid in the Douaumont ossuary. The Verdun Memorial opened in 1967 and is located near Fleury-devant-Douaumont. It commemorates both the French and German losses and includes a museum.

Verdun part 2 - The Illusion: Under the new commander of Verdun, General Petain, the French army tries to block the invasion.

The Pacific War in Color episode 4