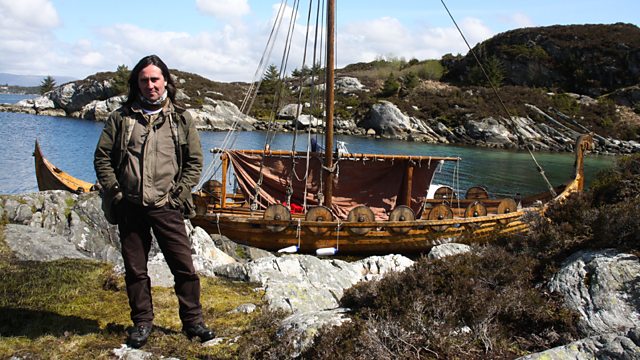 Vikings episode 3: Neil Oliver explores how the Viking Age finally ended, tracing the Norse voyages of discovery, the first Danish kings, and the Christian conversions that opened the door to European high society.

He also uncovers the truth about England’s King Canute – he was not an arrogant leader who thought he could hold back the waves, but the Viking ruler of an entire empire of the north and an early adopter of European standardisation.

Cnut Sweynsson, known as Cnut the Great or Canute, was King of Denmark, England and Norway; together often referred to as the North Sea Empire. Yet after the deaths of his heirs within a decade of his own, and the Norman conquest of England in 1066, this legacy was lost. He is popularly invoked in the context of the legend of King Canute and the tide, which often misrepresents him as a deluded monarch believing he has supernatural powers, contrary to the original legend which portrays a wise king who rebuked his courtiers for their fawning behaviour.

As a Danish prince, Cnut won the throne of England in 1016 in the wake of centuries of Viking activity in northwestern Europe. Scotland submitted to him in 1017. His later accession to the Danish throne in 1018 brought the crowns of England and Denmark together.

Cnut sought to keep this power-base by uniting Danes and English under cultural bonds of wealth and custom, as well as through sheer brutality. After a decade of conflict with opponents in Scandinavia, Cnut claimed the crown of Norway in Trondheim in 1028. The Swedish city Sigtuna was held by Cnut (he had coins struck there that called him king, but there is no narrative record of his occupation).

Cnut died on 12 November 1035. In Denmark he was succeeded by Harthacnut, reigning as Cnut III, although with a war in Scandinavia against Magnus I of Norway, Harthacnut was “forsaken [by the English] because he was too long in Denmark”.

Vikings episode 3: Neil explores how the Viking Age ended, tracing the Norse voyages of discovery, the first Danish kings, and the Christian conversions