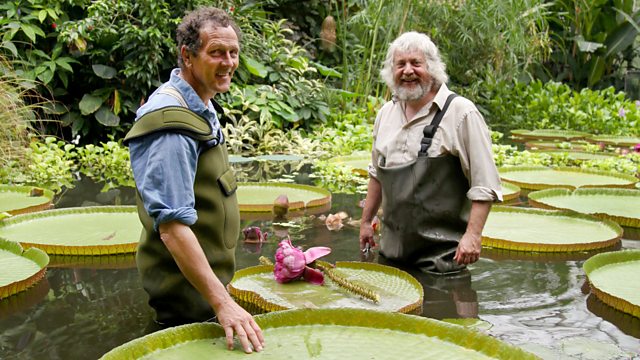 The Secret History of the British Garden episode 3: On his journey through 400 years of British gardens, Monty explores the extraordinary transformations that occurred throughout the 19th century. As a result of an expanding empire, scientific and technological innovation and social change, British gardens became more exotic, more colourful and more widely accessible than ever before.

Monty visits the most influential gardens of the period, from Queen Victoria’s royal retreat at Osborne to the very first public park, Derby’s Arboretum. At Kew and Edinburgh botanic gardens, he uncovers scientific secrets that enabled a wealth of new exotic plants from around the world to flourish back home. And on his journey, he gets hands-on experience of some of the technological advances that revolutionised garden design forever.

Derby Arboretum is a public park and arboretum in the city of Derby, England, located about 1 mile (1.6 km) south of the city centre in the Rose Hill area. It was opened in 1840, following the donation of the land by local philanthropist Joseph Strutt, and to designs by John Claudius Loudon.

It was the first publicly owned, landscaped, urban, recreational park in England. After many years of neglect, the Arboretum was extensively refurbished in the early 21st century with the aid of a Heritage Lottery Fund grant of almost £5 million. It is listed as Grade II* on the English Heritage Register of Parks and Gardens of Special Historic Interest in England.

Derby Arboretum opened in 1840 and is often described as “Britain’s first public park”. Although green spaces and common lands had existed previously, as had private parkland and gardens, the park in Derby was the first to be deliberately planned as a place of public recreation in an urban setting.

Kew Gardens is a botanic garden in southwest London that houses the “largest and most diverse botanical and mycological collections in the world”. Founded in 1840, from the exotic garden at Kew Park in Middlesex, England, its living collections includes some of the 27,000 taxa curated by Royal Botanic Gardens, Kew, while the herbarium, which is one of the largest in the world, has over 8.5 million preserved plant and fungal specimens. The library contains more than 750,000 volumes, and the illustrations collection contains more than 175,000 prints and drawings of plants. It is one of London’s top tourist attractions and is a World Heritage Site.

Kew Gardens, together with the botanic gardens at Wakehurst in Sussex, are managed by the Royal Botanic Gardens, Kew, an internationally important botanical research and education institution that employs over 1,100 staff and is a non-departmental public body sponsored by the Department for Environment, Food and Rural Affairs.

Title
The Secret History of the British Garden episode 3
Description

The Secret History of the British Garden episode 3: Monty explores the extraordinary transformations that occurred throughout the 19th century.