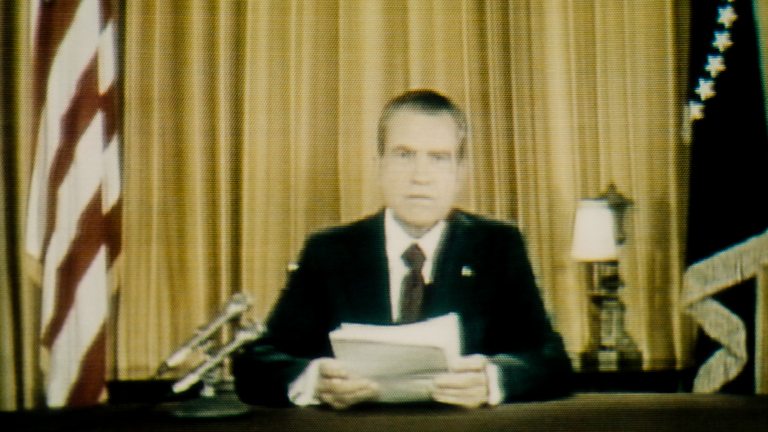 Documentary series re-examining the Watergate Affair. The Watergate scandal was a major political scandal in the United States involving the administration of U.S. President Richard Nixon from 1972 to 1974 that led to Nixon’s resignation. The scandal stemmed from the Nixon administration’s continuous attempts to cover up its involvement in the June 17, 1972, break-in of the Democratic National Committee headquarters at the Washington, D.C. Watergate Office Building.

After the five perpetrators were arrested, the press and the U.S. Justice Department connected the cash found on them at the time to the Nixon re-election campaign committee. Further investigations, along with revelations during subsequent trials of the burglars, led the U.S. House of Representatives to grant its judiciary committee additional investigation authority to probe into “certain matters within its jurisdiction”, and the U.S. Senate to create a special investigative committee.

The resulting Senate Watergate hearings were broadcast “gavel-to-gavel” nationwide by PBS and aroused public interest. Witnesses testified that the president had approved plans to cover up administration involvement in the break-in, and that there was a voice-activated taping system in the Oval Office. Throughout the investigation, the administration resisted its probes, which led to a constitutional crisis.

Several major revelations and egregious presidential action against the investigation later in 1973 prompted the House to commence an impeachment process against Nixon. The U.S. Supreme Court ruled that Nixon had to release the Oval Office tapes to government investigators. The tapes revealed that Nixon had conspired to cover up activities that took place after the break-in and had attempted to use federal officials to deflect the investigation.

The House Judiciary Committee then approved articles of impeachment against Nixon for obstruction of justice, abuse of power, and contempt of Congress. With his complicity in the cover-up made public and his political support completely eroded, Nixon resigned from office on August 9, 1974. It is believed that, if he had not done so, he would have been impeached by the House and removed from office by a trial in the Senate. He is the only U.S. president to have resigned from office. On September 8, 1974, Nixon’s successor, Gerald Ford, pardoned him.

There were 69 people indicted and 48 people—many of them top Nixon administration officials—convicted. The metonym ‘Watergate’ came to encompass an array of clandestine and often illegal activities undertaken by members of the Nixon administration, including bugging the offices of political opponents and people of whom Nixon or his officials were suspicious; ordering investigations of activist groups and political figures; and using the Federal Bureau of Investigation, the Central Intelligence Agency, and the Internal Revenue Service as political weapons. The use of the suffix “-gate” after an identifying term has since become synonymous with public scandal, especially political scandal.

Watergate episode 1: In 1974, Richard Nixon, brought down by the Watergate scandal, became the only US president ever to resign.