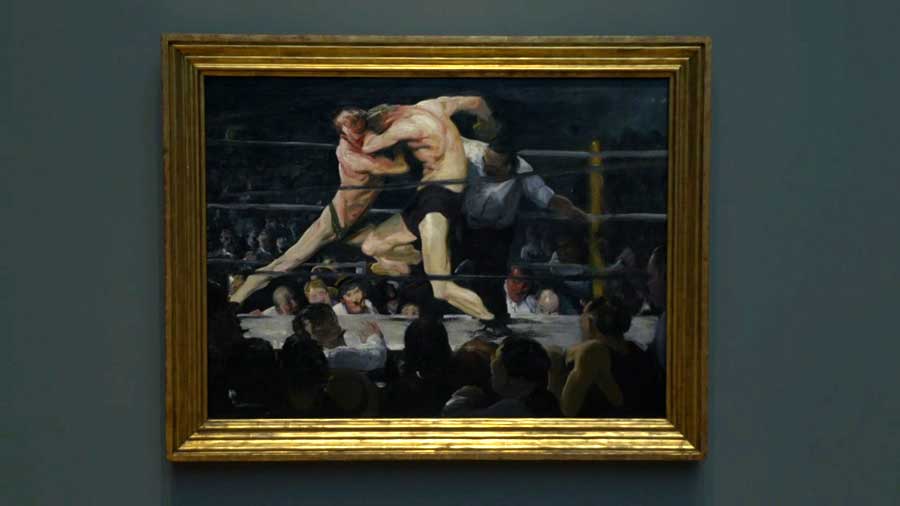 Big Sky, Big Dreams, Big Art: Made in the USA episode 2: This episode is set in the American metropolis – the soaring new cities of the East Coast with their futuristic skylines and lofty skyscrapers.

But instead of looking up at the futuristic towers, Waldemar Januszczak explores the squalid boxing rings painted by George Bellows, Reginald Mash’s decadent awaydays on Coney Island and the crazy escape into theosophy and abstraction mounted by Thomas Wilfred. The film culminates in the harsh immigrant experience of Ellis Island and the profound impact that rootlessness had on the art of Mark Rothko.

Mark Rothko, was an American painter of Lithuanian Jewish descent. Although Rothko himself refused to adhere to any art movement, he is generally identified as an abstract expressionist.

Mark Rothko was born in Daugavpils, Latvia (then in Russian Empire). His father, Jacob (Yakov) Rothkowitz, was a pharmacist and an intellectual who initially provided his children with a secular and political, rather than religious, upbringing. According to Rothko, his pro-Marxist father was “violently anti-religious”. In an environment where Jews were often blamed for many of the evils that befell Russia, Rothko’s early childhood was plagued by fear.

Despite Jacob Rothkowitz’s modest income, the family was highly educated (“We were a reading family”, Rothko’s sister recalled), and Rothko was able to speak Lithuanian Yiddish (Litvish), Hebrew and Russian.[citation needed] Following his father’s return to the Orthodox Judaism of his own youth, Rothko, the youngest of four siblings, was sent to the cheder at the age of five, where he studied the Talmud, although his elder siblings had been educated in the public school system.

George Wesley Bellows was an American realist painter, known for his bold depictions of urban life in New York City. He became, according to the Columbus Museum of Art, “the most acclaimed American artist of his generation”.

George Wesley Bellows was born and raised in Columbus, Ohio. He was the only child of George Bellows and Anna Wilhelmina Smith Bellows (he had a half-sister, Laura, 18 years his senior). He was born four years after his parents married, at the ages of fifty (George) and forty (Anna). His mother was the daughter of a whaling captain based in Sag Harbor, Long Island, and his family returned there for their summer vacations. He began drawing well before kindergarten, and his elementary–school teachers often asked him to decorate their classroom blackboards at Thanksgiving and Christmas.

At age 10, George took to athletics, and trained to be a baseball and basketball player. He became good enough at both sports to play semipro ball for years afterward. During his senior year, a baseball scout from the Indianapolis team made him an offer. He declined, opting to enroll at The Ohio State University (1901–1904). There he played for the baseball and basketball teams, and provided illustrations for the Makio, the school’s student yearbook. He was encouraged to become a professional baseball player, and he worked as a commercial illustrator while a student and continued to accept magazine assignments throughout his life. Despite these opportunities in athletics and commercial art, Bellows desired success as a painter. He left Ohio State in 1904, just before he was to graduate, and moved to New York City to study art

Big Sky, Big Dreams, Big Art: Made in the USA episode 2: This episode is set in the American metropolis - the soaring new cities of the East Coast