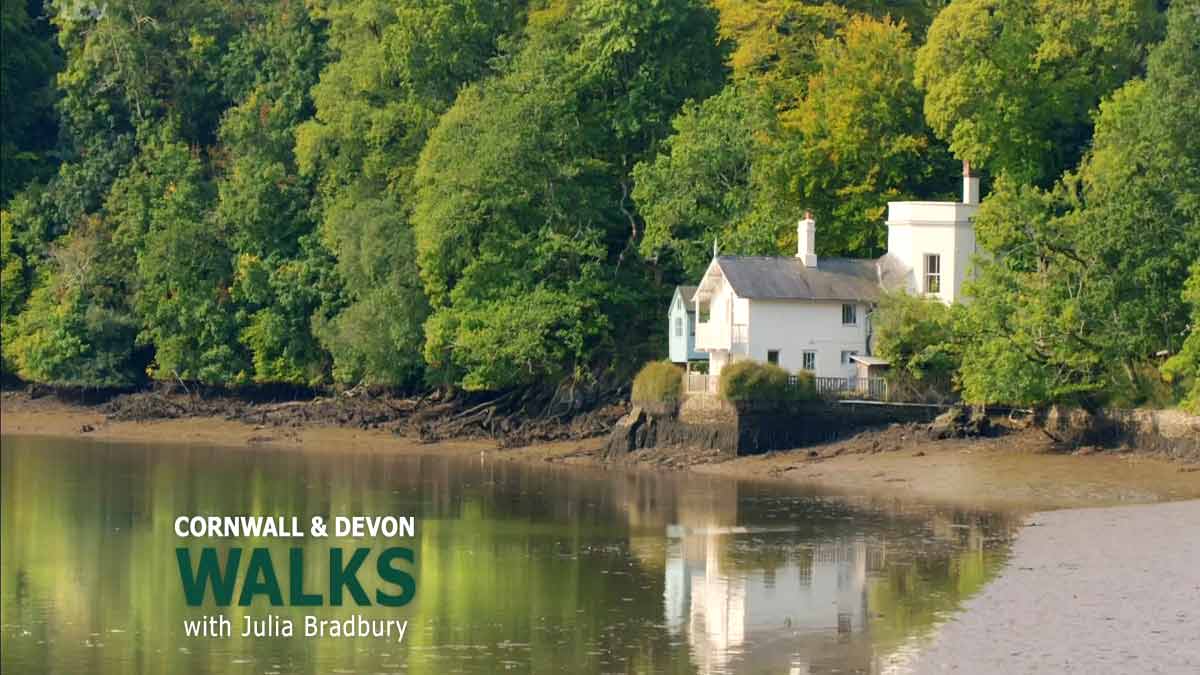 Cornwall and Devon Walks with Julia Bradbury episode 7: This time, Julia takes a scenic river walk through the dramatic Dart Valley in Devon, travelling 13 miles along the banks of the River Dart from historic Totnes to bustling Dartmouth, where houses nestled in the hills overlook the town’s picturesque harbour.

Along the way, Julia drops into a shoemaker to see bespoke boots being put together, learns about rewilding at the Sharpham Estate where she helps harvest Pinot Noir grapes, and takes a look inside Greenway, the secluded home of Agatha Christie. To finish it off, she tucks into fish and chips with seafood expert Mitch Tonks in Dartmouth.

The River Dart is a river in Devon, England which rises high on Dartmoor, and flows for 75 kilometres (47 mi) to the sea at Dartmouth.

The river’s name is presumed to be Brythonic Celtic meaning ‘river where oak trees grow’ due to the banks of the lower Dart being covered in ancient woods of native oak. The Cornish word for oak is derow; alternatively the word for water is dowr, the probable source of other British hydronyms such as Derwent Water. Bray notes in 1832 that the name was occasionally spelled ‘Darant’.

The river begins as two separate branches (the East Dart and West Dart), which join at Dartmeet. The paths along these rivers offer very attractive walking, and there are several small waterfalls. The rivers are crossed by a number of clapper bridges, notably at the hamlet of Postbridge.

After leaving the moor, the Dart flows southwards past Buckfast Abbey and through the towns of Buckfastleigh, Dartington and Totnes. At Totnes, where there is a seventeenth-century weir (rebuilt in the 1960s), it becomes tidal, and there are no bridges below the town.

Dartmouth is a town and civil parish in the English county of Devon. It is a tourist destination set on the western bank of the estuary of the River Dart, which is a long narrow tidal ria that runs inland as far as Totnes. It lies within the South Devon Area of Outstanding Natural Beauty and South Hams district, and had a population of 5,512 in 2001, reducing to 5,064 at the 2011 census. There are two electoral wards in the Dartmouth area (Townstal & Kingswear). Their combined population at the above census was 6,822.

In 1086, the Domesday Book lists Dunestal as the only settlement in the area which now makes up the parish of Dartmouth. It was held by Walter of Douai. It paid tax on half a hide, and had two plough teams, two slaves, five villagers and four smallholders. There were six cattle, 40 sheep and 15 goats. At this time Townstal (as the name became) was apparently a purely agricultural settlement, centred around the church. Walter of Douai rebelled against William II, and his lands were confiscated and added to the honour of Marshwood (Dorset), which sublet Townstal and Dartmouth to the FitzStephens.

It was probably during the early part of their proprietorship that Dartmouth began to grow as a port, as it was of strategic importance as a deep-water port for sailing vessels. The port was used as the sailing point for the Crusades of 1147 and 1190, and Warfleet Creek, close to Dartmouth Castle is supposed by some to be named for the vast fleets which assembled there. Dartmouth was a home of the Royal Navy from the reign of Edward III and was twice surprised and sacked during the Hundred Years’ War, after which the mouth of the estuary was closed every night with a great chain. The narrow mouth of the Dart is protected by two fortified castles, Dartmouth Castle and Kingswear Castle. Originally Dartmouth’s only wharf was Bayard’s Cove, a relatively small area protected by a fort at the southern end of the town.

Cornwall and Devon Walks with Julia Bradbury episode 7: This time, Julia takes a scenic river walk through the dramatic Dart Valley in Devon