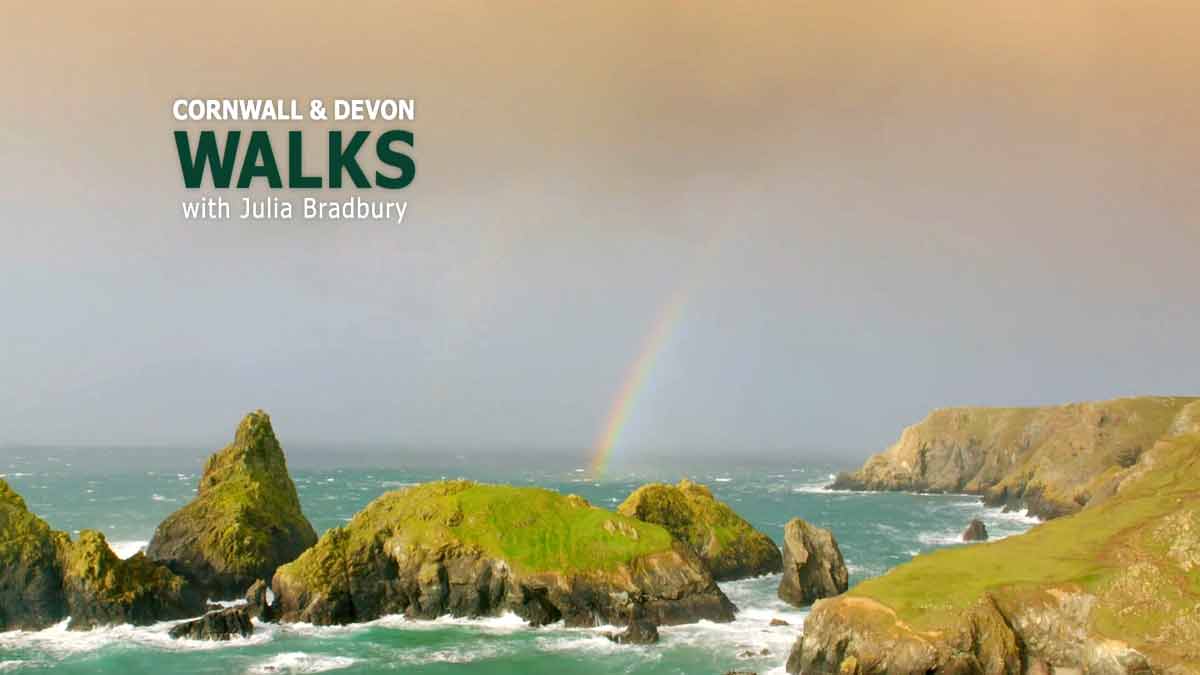 Cornwall and Devon Walks with Julia Bradbury episode 6: This time, Julia takes a bracing coastal hike along 7.5 miles of the wild Lizard Peninsula, Cornwall’s most southerly point, starting at the much-photographed Kynance Cove and finishing at the idyllic fishing village of Cadgwith. Along the epic and scenic coastline, she learns about Serpentine Rock, visits a hut that changed the course of modern technology and gets a pasty-making masterclass.

The Lizard is a peninsula in southern Cornwall, England, United Kingdom. The most southerly point of the British mainland is near Lizard Point at SW 701115; Lizard village, also known as The Lizard, is the most southerly on the British mainland, and is in the civil parish of Landewednack, the most southerly parish. The valleys of the River Helford and Loe Pool form the northern boundary, with the rest of the peninsula surrounded by sea. The area measures about 14 by 14 miles (23 km × 23 km). The Lizard is one of England’s natural regions and has been designated as national character area 157 by Natural England. The peninsula is known for its geology and for its rare plants and lies within the Cornwall Area of Outstanding Natural Beauty (AONB).

The name “Lizard” is most probably a corruption of the Cornish name “Lys Ardh”, meaning “high court”; it is purely coincidental that much of the peninsula is composed of serpentinite-bearing rock. The Lizard peninsula’s original name may have been the Celtic name “Predannack” (“British one”); during the Iron Age (Pytheas c. 325 BC) and Roman period, Britain was known as Pretannike (in Greek) and as Albion (and Britons the “Pretani”).

The Lizard’s coast is particularly hazardous to shipping and the seaways round the peninsula were historically known as the “Graveyard of Ships” (see below). The Lizard Lighthouse was built at Lizard Point in 1752 and the RNLI operates The Lizard lifeboat station.

Cadgwith is a village and fishing port in Cornwall, England, United Kingdom. It is on the Lizard Peninsula between The Lizard and Coverack. It is in the civil parish of Grade Ruan.

The village has its origins in medieval times as a collection of fish cellars in a sheltered south-east facing coastal valley with a shingle cove. Fishing subsidised local farmers’ livelihoods. Cadgwith was originally called ‘Porthcaswydh’, becoming ‘Por Cadjwydh’ in Late Cornish, and is derived from the Cornish word for ‘a thicket’, literally meaning battle of trees, probably because the valley was densely wooded.

From the 16th century, the village became inhabited, with fishing as the main occupation. Subsequently, houses, lofts, capstan houses, and cellars constructed of local stone or cob walls and thatched or slated roofs were built along the beach and up the sides of the valley leading to Cadgwith’s characteristic Cornish fishing village appearance. In recent times a very small Anglican church was built, next to the path from the car park down to the seafront, dedicated to St Mary.

Cornwall and Devon Walks with Julia Bradbury episode 6: This time, Julia takes a bracing coastal hike along 7.5 miles of the wild Lizard Peninsula